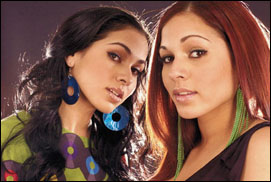 According to a story in Rap-Up, Nicole and Natalie Albino contend that they've had their latest album ready to go for 'months' but cannot get the label to ship it. The pair also claim that label head Bryan Leach has not been returning their calls.

"Starting a new campaign today… ‘Nina Sky Doesn’t Play Polo,’" the two performers Tweeted. "For months we’ve had a complete album, ready for release. Y’all wanna know what’s really goin’ on? Nothing, that’s the problem. We released videos and singles without support from our label. All good… Stayed positive. After months of no movement, we asked to be released – still nothing. No acknowledgment from the President of our label, Bryan Leach. Bottom line, we want to be released. If you’re really down with our movement, holler [at] Bryan Leach."

As a consequence of the ongoing friction with their label, some tracks that had previously been recorded by Nina Sky for the new album have apparently been given to other artists, including a track entitled 'DJ Made Me Do It' which producers ended up giving to SRC records singer Shontelle.

"The fact of the matter is, we lost a great record that was something we put our heart and souls into." Natalie tweeted. – CelebrityAccess Staff Writers