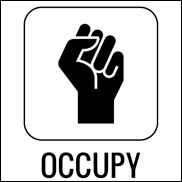 LOS ANGELES (Hypebot) – The falling security of the US economy bears an uncanny resemblance to the relative microcosm that is the music Industry. The occupy movements 99% are angry at the 1% with all the wealth. Those at the top are overtly occupied with increasing their own worth, with little respect for the prosperity of people who make up the majority of the population.

The success rate of musicians is staggeringly similar to the 99 to 1 statistics. Those with power enjoy the trappings that their position brings, and they seem just as preoccupied with growing their own success as the Wall Street 1%.

The instability of each economy and downfall draws surprising parallels as well. The way the US banking system works is that the Federal Reserve requires banks to hold 10% of their money in the reserve. However if you put $100 in your bank they do not put $10 into the reserve, the say that the $100 is the 10% and this creates $900 for the bank. This allows the bank to offer lots of credit, they then charge interest and make even more money. Confusing I know, but the upshot is that 90% of the wealth floating around is not real. This is why the economy crumbles. People cannot make their car payments, credit card payments, or house payments. Money in does not equal money out. The banks suddenly are not getting their payments and the whole infrastructure of the economy is threatened.

In essence, is this not what destroyed the music industry?

Labels would offer a ridiculous line of credit to artists. They would ship CDs to stores and get paid on the pre-sales; this was the labels line of credit. Of course some product would be returned, but it would just be replaced with the latest releases. The big sellers would bring in profit allowing this cycle to continue. However, when the CD crashed the line of credit provided by the record stores disappeared. Money in did not meet money out, and the labels suffered.

However, it seemed the labels did not learn from this. They are corporations and corporations are not efficient. They are fine charging ahead like a transatlantic cruise liner – the small waves are not big enough to upset its course – but throw an iceberg in the way and they don’t have time to maneuver around it until it’s too late.

The ship may be sinking, but do you know who got a place in the few lifeboats that were available? Those artists at the top. The 1%. They hold the power. They hold the wealth.

The independent artist is quick to hold the labels up as the bad guy, making them the 1%, but aren’t the real 1% the popular artists themselves?

We hear the independent labels causing a ruckus and pulling content from Spotify, but when do the artist at the top stick up for the rest of us? When do those artist boycott the MTV awards for not playing music anymore? When do artists pour money back into programs to discover new talent? When do artists use their fan base to bring awareness to other bands new releases? When do the artists use their weight when Spotify payments seem unfair?

There are a few exceptions, but in reality it is not the major labels that need to be occupied – it is the artists making millions. They are the ones with the money, the power, and the ability to instigate change. The labels are destroying themselves, but the artists at the top seem to be doing just fine.

Then again, if you were in their position, what would you do? —
This post is by regular Hypbeot contributor Robin Davey, Head of Music and Film Development at GROWVision.