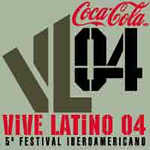 (CelebrityAccess MediaWire) — The fifth edition of Festival Vive Latino 2004 is still going strong. As one of Latin America's most important music festivals, this year's all day event on May 9 at Mexico City's Foro Sol Stadium drew a sold out crowd of 60,000 people and grossed USD $1,137,615. The festival was booked by OCESA Presents and promoted by OCESA Entretenimiento.

“This year was our fifth Festival Vive Latino and without a doubt it was, the best so far,” says Jordi Puig, OCESA Presents, director of International Talent. “We have, with hard work and attention to detail, improved the festival from year to year. It will be difficult to improve on 2004, but we will try.”

The sold out ‘Latin Rock Marathon’ incorporated three stages and 34 acts, headlined with A-list international performers, and ran from noon to midnight. The festival took place on Sunday May 9, 2004 at the Mexico City venue, Foro Sol Stadium.

“We put together a stellar lineup for Vive Latino 2004, which is reflected in the box office numbers,” says Bruce Moran, CEO, OCESA Presents Inc. “We are very happy with this year’s results.”

Festival highlights included: a reunion for La Cuca, who got together expressly for the festival; a rare performance by Jaime Lopez, an icon of Latin Rock; and an enthusiastic set from American band The Mars Volta, featuring their patented jams.
The festival set-up included one main stage and two secondary stages keeping the capacity crowd surrounded in sound for the entire day.

‘El Chopo,’ a famous Mexican alternative street fair, was set up inside venue perimeters where artisans and vendors sold their wares. The day’s festivities were halted at 7:25 PM Mexico City time for 15 minutes of reflection and formation of the longest human chain for peace ever put together in Mexico. — Jane Cohen and Bob Grossweiner