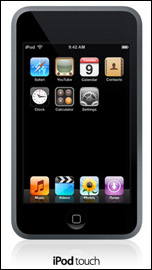 What kind of crazy fucked up world do we live in where you can keep 40,000 songs IN YOUR POCKET and the labels think a reasonable price for each and every one of them is a buck, IF NOT A $1.29 IF YOU WANT THEM SANS DRM!

It’s like we’re living in the twilight zone. The labels are stuck in the nineties and the public is in the twenty first century. Who even HAS 4,000 albums?

A lot of people. Oh, not as CDs. But as MP3s, stolen from the Net, their friends, their family.

People WANT music. The labels just can’t figure out how to sell it to them.

Took them over three years to even deliver it easily online at a reasonable price (2003’s iTunes Store). But, they still haven’t given people what they want. How about a 160 gig iPod PRELOADED with the greatest hits of the sixties? Or the history of dance music? Don’t bother to steal the music, you can get it, for an extra fifty bucks.

Those iPods would fly off the shelf. But that deal can’t be made, because Apple has TOO MUCH POWER! We must stop Steve Jobs, before he ruins our business. Huh? Isn’t this like making Peyton Manning play with weights around his ankles? Refusing to let Tiger Woods have eye surgery? It’s their incredible talent, their superstar qualities, that GROW THE SPORT! Golf without Tiger is tennis. A game for old fogies that has peaked. Online music without Apple is what it was before the iPod, a field for HOBBYISTS! Steve Jobs gets non-techies, people who don’t even know how to manage virus protection on their PCs, to buy iPods, and USE THEM, and this is a problem?

Oh, I guess it’s a problem if you believe that the CD must rule forever. But those same execs who feel this way are MARRIED to their giant plasma and LCD TVs. And they don’t get just three channels, but HUNDREDS! Why should music be forced to live in the past?

I’m not saying every fan has 40,000 tracks. Just that more people have more music than ever before. And they want to take it with them. And they’re not averse to paying for it, AS LONG AS THE PRICE IS REASONABLE!

It’s like mobile phones. Imagine if EVERY call was a buck. How many would be made?

Imagine a twelve year old, asking for a phone. NO SARAH, you can’t have one! You’re gonna bankrupt us! And, if Sarah is LENT one for a sleepover, her parents will spend five minutes telling her NOT TO USE IT! That it’s for EMERGENCIES ONLY!

God, the mobile business would be a fraction of what it is now. It would be like…1988. Where the labels are comfortable. Jimmy Iovine can afford dollar a minute mobile calls. He would tell people just to get richer, like him, so they can afford them too!

But people’s lives are enriched by their mobile handsets/lives. They’re in contact. Just like with the Net. Imagine if computers still cost $4,000 and Net access was $100 a month. How big would MySpace be?

Oh, you can rent the music!

Did you read Jon Healey’s experience with Rhapsody and the iRiver Clix?

The iPod is the gold standard. It just works. And all those who’ve lamented the fact that they’ve got to create playlists, slice up their libraries, to get their iPods to sync, have been delivered today.

Oh, you have no idea what I’m talking about? PROVES THE POINT! If you’ve got a large library, bigger than your iPod’s storage capacity, you don’t get automatic sync, you get an error message. But now, you can have automatic sync up to a total of 40,000 TRACKS! You can carry that obscure track you want to hear once a decade on vacation. You don’t have to leave it at home. Why should you have to leave it at home?

Break Apple’s stranglehold on distribution. Give it a shot. But I don’t think it makes a difference, because as Mr. Jobs said, people buy almost no tracks from the iTunes Store! That’s not how they fill their iPods!

It’s time for the labels to enter reality. Every teenager should be able to have legal Zeppelin for a pittance. Yup, a pittance. So when they lose their iPods, they can buy the music ALL OVER AGAIN!

End result? The labels are rescued from financial ruin and the public is music-crazed, easily experiencing the broad range of the most fulfilling art form. What’s wrong with that?