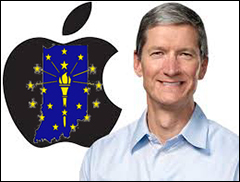 Aren't we supposed to hate corporations?


But Tim Cook wrote a piece in the "Washington Post" and the governor blinked, it was techies and WALMART that stopped Indiana in its tracks. Isn't this what musicians used to do?


But musicians are afraid of offending people, afraid of being "Dixie-Chicked," busy complaining that they just can't make enough money in this new connected world as they charge three digits for tickets and make deals with any corporation that will have them. Because, you know, musicians need to eat too.


One of the defining attributes of Led Zeppelin was they just did not give a fuck. Destroy hotel rooms? Peel off some hundreds. Musicians thought they were above the law, that the government couldn't touch them because they had the people on their side. And they did. But now the corporations do. People will get in heated arguments over iOS and Android, we used to have these fights over bands.


Tim Cook knows the government is clueless. We've seen that from Napster on. By time the government holds a hearing, the tech scene has moved on, the way the audience moved from Herman's Hermits to Jimi Hendrix. Want to have progress? Take matters into your own hands. Kind of like Irving Azoff's performing rights organization. I'm not for the Balkanization of PROs, but it takes someone of Irving's cunning and power to not only realize that Pandora would be screwed without Pharrell, but to take this theory and turn it into reality. That's the story of business, utilizing leverage to get what you want, not crying to the government.


So Tim Cook runs the richest company in the world and not only comes out of the closet, but challenges lawmakers in America's heartland? Isn't this where the real people live and work according to Sarah Palin? How dare you offend America's heartland! But the truth is the law was payback for religious zealots who hated gay marriage. It's just that simple. But then they tried to shift the debate to freedom to not bake a cake and the whole country got diverted from the real issue. Which is a small core of people is working behind the scenes to get what they want while you are sleeping.


But Tim Cook was not sleeping. Scores of other tech companies were not sleeping. They could see the bill for what it was, and pushed back immediately, the same way they acknowledge software problems and push out fixes via the internet. While records take years to develop, musicians selling antique albums and blaming everybody but themselves for the decline of their business, those in the know discard the past and embrace the future.


What, Jeff Tweedy canceled a show in Indiana.


But Jay Z and Alicia Keys and Madonna were too busy trying to line their coffers in NYC, launching the moribund Tidal so they could get richer. And what is amazing is they've achieved the exact opposite of their desire. They believed their fans loved them and would embrace the service when online there was outrage that these "musicians" just wanted to get more bucks. I've seen more blowback against this cabal than Tim Cook has experienced in his three and a half years as head of Apple. And at least when they criticize him, they criticize his job performance. No one cares about Madonna's new music. How could this group be so tone-deaf as to take the money and run whilst saying the opposite? They can't improve payouts. And they all did it for the dough, taking money from the enterprise the same way they do from cosmetic and beer companies. These are people to believe in?


When did it become a badge of honor to stand for nothing?


And to be afraid of your audience… That's right, I'm speaking to you country acts. Who play rock and rap and pledge fealty to right wing hogwash all the while. Why don't you push back against small thinking and racist, sexist and anti-gay comments? You want to take the spoils but none of the responsibility. Imagine if your records actually said something, the right thing, then you might cross over.


As for the pop acts… Do we expect faceless foreigners to testify for you? They make the records, Max Martin is a fierce composer, but most people are clueless as to who he is, he's got no profile.


But Tim Cook has a profile.


His company makes expensive products that people love! They used to charge for operating systems, now they're FREE! Apple sees that the money is in hardware, in services, while musicians keep bitching that people are not buying full-length CDs. Make me puke.


So now I get why corporations have all the power. Especially tech.


Because they make the fuel this country runs on. Music is a sideshow. Their proprietors are willing to do the heavy lifting to change the world. As a matter of fact, if they do not, they fail. And there's a race to constantly improve the standard. From MySpace to Facebook to Snapchat…it's a cornucopia of innovation.


As a result, these people become so wealthy that they are unafraid to utter their opinions.


And unlike the musicians, they're educated. Really Alicia Keys, you want me to believe in you when you can't even pronounce "adage"? Illustrates you didn't write your speech, shows you'd have been better off staying in school.


But the goal is to make it while you're barely a teenager. And to spam us with tech's tools and get press in antiquated publications as we ignore you all the while. Meanwhile, we're lining up at the Apple Store to buy their latest gadget.


The world has changed.


I used to believe in the players.


Now I believe in the coders. And the people who grease their skids.


Come on, can you imagine Lucian Grainge standing up to Indiana? Doug Morris barking back to Arkansas?