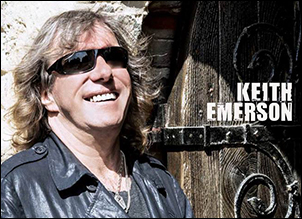 "Welcome back my friends to the show that never ends"


It was not supposed to be this way. We and our music were supposed to rule forever. We might get old, but we're still young at heart. No one was ever supposed to DIE! Certainly not of natural causes.


Keith Emerson was in the Nice. They covered Leonard Bernstein's "America" from "West Side Story," a song every baby boomer knew, since before the Beatles Broadway soundtracks ruled and our parents owned them all.


This was the late sixties, when music was exploding, when it seeped from AM to FM, when the tracks got longer, when the sounds got wilder, when we expected you to blow our mind and when you did we told everybody about you.


Like my friend Ronnie, from Brookline, Mass. We met at a summer program in New Hampshire, that's how we bonded, over music, that was the glue of our generation. He told me about this track, he was a fan, of a band with bad vocals but an incredible keyboardist, Keith Emerson, from back when knowing how to play your instrument was a badge of honor. Guitars ruled, but there were those who took lessons, who schlepped their giant keyboards around, and dazzled us.


I still remember the cover, with those red balls on the desert sand.


I didn't own it. Because everyone was middle class, no one was rolling in dough, there was more music we wanted to hear than we could afford, but when we went to a compatriot's abode and saw one of these LPs, we put it on and marveled.


But then came ELP.


Of course we didn't call them that at first, we employed all three monikers, they were Emerson, Lake & Palmer, and they owned the biggest album of spring 1971.


It was instant. A sound heard everywhere.


I bought it sight unseen, the buzz was that loud, the reviews were that good.


You could call it prog rock, you could call it electronic, all I'll tell you is despite what the "Billboard" chart will tell you, the ditties dominating the era, it was ELP that you heard played everywhere. Most specifically "Lucky Man."


And sure, it was a ballad, made exquisite by Greg Lake's voice. But what put it over the top was Keith Emerson's synth.


It was a supergroup, even though most had heard of none, a trio, like Cream, and they were an instant classic, they toured and everybody learned that Keith Emerson stabbed his organ.


But then the backlash began, it was too much too soon, you can't go from nowhere to everywhere overnight, the establishment doesn't like that. The follow-up, "Tarkus," got bad reviews. "Trilogy," the third LP, was positively excoriated. The act was now for fans only.


But oh how the fans embraced the band.


The act was so successful that it was rewarded with its own label, Manticore, with its own colorful majordomo, Mario Medius. We knew all this, because the musicians were our heroes, and we followed them, knew everything about them, they were testing limits, challenging precepts, making it up as they went along. Imagine if Jeff Bezos were cool. Mark Zuckerberg too. Guys not only wanted to be them, girls wanted to screw them. And there were female stars too, but the point is whoever played, whoever channeled the gods, whoever dominated our consciousness, was revered. Music was our religion. And Keith Emerson was one of the deities.


"We're so glad you could attend
Come inside, come inside"


It was a ritual, you didn't go to impress others, to post on Instagram, but to bond with the music. You knew this was your only chance to hear the deep cuts, next year the band would have a new LP and they'd only play the hits from yesteryear.


You bought your ticket at the record store, possibly mail order, and when you showed up at the arena, early, you were confronted with your generation, everybody looked like you, everybody had a similar mind, everybody had the same politics, everybody smoked dope, everybody had multiple sexual partners…


And everybody lived for the music, every day.


"Come inside, the show's about to start
Guaranteed to blow your head apart"


The first note shot adrenaline through your body, you couldn't believe you were really here, seeing your favorite band, hearing these songs live.


"Rest assured you'll get your money's worth
The greatest show in heaven, hell or earth"


Tickets were cheap, always under ten bucks. Scratch a boomer and you'll find their peak experiences were always concerts. They can all tell you their top three!


Sure, "Trilogy" had the ubiquitous hit, "From The Beginning," but at this point the media had given up on ELP, but not the fans. "Brain Salad Surgery" was huge, the band went on a monstrous arena tour, everybody had to hear "Karn Evil 9."


And sure, there were twists and turns, changes better than any ride at Disneyland, and Greg Lake's vocal was an integral element, and Carl Palmer's drum fills were shots to the heart, but what kept it all together, what put it over the top, was Keith Emerson's keyboards.


You know the intro, even if you think you don't, it emanated from every radio in the nation for years.


And it got even better, Keith was locked into a groove and performing at a speed and quality that seemed humanly impossible.


That's right, this guy who never sang a lick was the star of the band.


Take that all you children working with the producer du jour to run your record up the chart.


Take that all you adolescents who believe you deserve attention even though you've put more time into trumpeting your efforts on social media than actually practicing your instrument.


Take that all of you who believe it should come easy, with no dues, that you're entitled to success.


Keith Emerson labored in the trenches, there was no fall back position, he just had to fall in with the right bunch of players to make it all work.


And then it didn't.


Corporate rock took hold, radio was no longer free form, disco killed rock and then MTV caused a rebirth with strictures heretofore unknown, you had to look the part, hooks were everything and you could not go on at length. Music became more and more conservative, the business focused on pop hits, and it's like the sixties and seventies never existed, never happened.


I don't think anyone under fifty knows Jefferson Airplane deep cuts. They don't know that Paul Kantner was a legendary hothead in a band of personalities who were all about testing limits, delivering genius along the way.


And the same press that hated ELP hated the Eagles, and the SoCal band was even bigger and better, the biggest of all time. Talk about the soundtrack of our lives…


But you cannot read this.


You owned a Camaro. Or maybe a Pinto. Your most valuable possession was your stereo. You scrimped and saved to buy music. You knew your favorites by heart, maybe because you played them so damn much.


And it's a tragedy that George Martin is gone, but he made it to ninety. You've got to go sometime, even though we thought he was gonna be here always.


But Glenn Frey, Paul Kantner and now Keith Emerson… They were supposed to be here as long as we were, which was FOREVER!


Yes. The record company was our friend. The concert promoter too. We were all in it together, in a hermetically sealed universe wherein Keith Emerson was a member of the pantheon.