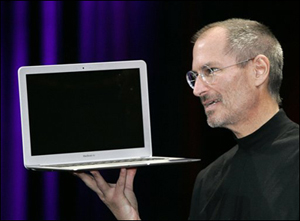 or a minus? Does the fact that he didn’t stay up all night listening to

doesn’t possess the soul, the DNA, or does it mean he’s not burdened by

history and he can innovate in ways the oldsters can’t?

Rapino sits atop the big kahuna, Live Nation. That’s where the money is

these days, touring. And he’s got the biggest operation. Rapino is where

Can Rapino eliminate the heinous convenience/ticketing fees that hurt our

He’s the one with the power, let’s see how he executes.

As for the stock price and Artist Nation…

Unfortunately, Rapino and Cohl are looking to cash out. We wish they were

long term players, but that doesn’t decrease their power. And Cohl always

seems to resurface anyway. But if you’re looking for Live Nation to be

the new record company, I wouldn’t count on it. Because big acts don’t

I don’t really think he gives a shit about music. He seems to care more

features, with Pixar. We don’t see him starting a new kind of record

But the iTunes Music Store is where the rubber meets the road. It’s where

the transaction happens. And that’s why he’s got power.

If Jobs suddenly said subscription rental was the future, and available

at the iTunes Store, where you sync your iPod, that formula would

burgeon, but it still wouldn’t dominate. Yet, he has the power.

do something because it was "against their policy", he could counter that

But who could foresee the slip in label power in this century. Now Irving

manipulates the label, when he wants to use one at all. He sold the

With Irving it’s not a matter of trust, he’s just smarter than just about

everybody else. And accessible. And charming. And the other managers hate

Irving’s got the power in an era where the manager dominates. Hell,

Irving’s partner Howard Kaufman has got Rapino tied in a knot. Rapino

You want to know the future of this business? Watch Irving.

And his artists trust him…

Touring can’t be stressed enough. AEG is perched at the absolute top of

the pyramid. They’re about touring guaranteed moneymakers. They’re not

full-service like Live Nation, but they’re very profitable, and a power

that can outbid LN.

Great work with the O2, turning a white elephant into a first class

venue. And now Coachella’s going to operate on the east coast too!

They couldn’t be more different, but they’re all extremely powerful.

You might not see Chip’s name in the paper, but he controls the jam band

world, starting with the Dave Matthews Band. And these acts might not be

sexy, but they have unending grosses, they can tour forever and people

want to see them.

Rob Light has built CAA into a monolith, even though many felt that when

the prior generation left, i.e. Tom Ross, CAA would falter.

Marc Geiger’s probably the most innovative thinker in the agency

business, one of the most insightful in all the music business. He lost

everybody’s money with ArtistDirect, but he didn’t lose his smarts. And

somehow he’s been able to rebuild Lollapalooza as a weekend, destination

Don’t curry favor with your A&R guy. Hell, your record label PRESIDENT is

less important than your agent. Your agent will get you paid. And your

label head might not even be able to break you. Acts are broken on the

road. And those acts that aren’t, that are build on Top Forty airplay and

television, don’t last and can’t do much business playing live, and

If he runs the smallest label and his star acts are pissed at him, how

Because he’s the one angling for change. He’s got no history in this

business, no allegiance to anything, he’s starting with a fresh slate.

He’s the one who’s going to try shit that makes a difference.

Some of his ideas are stupid. Like branding a corporation with a

song/act. It shows he has no idea of the true power of music, of people’s

relationship to it. Yet, despite his stumbles, he doesn’t want to fail,

he wants to come up with good ideas. He’s less worried about Best Buy and

all the old powers the business has been beholden to. He’s looking to the

future, not the past. Watch him.

MySpace and Facebook get all the ink, but Yahoo Music is the number one

music site on the Web. And the Web is where you break records.

We’ll even put Pitchfork here too. This business was built by, and is

sustained by, rabid fans. Rabid fans scour the Web for information on

their favorite acts and new acts. Too many sites are started with the

why MySpace has got such a bad name. And Mark Zuckerberg is doing a good

Music bloggers do it for the love of music. They can be trusted. Profit

is secondary. Are blogs the new radio? If not quite, they show a pathway

to the future, where it’s about being turned on by love, not hype.

I don’t listen to any of them on a regular basis. I’m a firm believer in

satellite radio. I like pros picking my music. But it seems that most of

the public is not with me, they don’t want to pay. If XM and Sirius

merge, and they probably will, since the Whole Foods/Wild Oats deal went

through, there’s a chance satellite will become the new cable. Ultimately

dominant over time. But right now, it doesn’t look that way.

Traditional, terrestrial radio is toast. When it comes to music. It’s not

where the active music consumer goes. Because of the calcified playlists

and the endless commercials. Sure, you can break an act on terrestrial

radio, but that’s the old model, that’s payoffs and hype. It’s not about

the audience, but the powers-that-be. Those radio records have less

impact than ever and the acts have briefer careers. Sure, it can be quick

money, but it’s not the future.

The future is niche, narrowcasting. And you get this on Net

radio. The majors are fighting it because they don’t like its openness,

the lack of control. But it’s what the people want.

Ubiquitous Net radio is not in the immediate future. We don’t have either

WiMax or Net-capable cars. But both are what the public want. And

eventually the technology will catch up with what the people desire.

If only he exercised his power for GOOD! Instead of being a bad traffic

Doug thinks it’s about breaking records on radio, seeing if they react at

retail. He’s old school, he hates the future. He and his compatriot Zach

Horowitz are single-handedly holding back the future of compensation for

that you have to know where in the food chain to charge, that the most

important thing is hooking the public on your wares, then figuring out a

Clive’s got no business innovation, and all those acts he’s building are

selling ever less. If only he broke a plethora of acts, of all stripes.

If only he didn’t meddle in the creative process. If only he was about

the future as opposed to the Clive business, then he’d truly be powerful.

Has done nothing, and probably never will. A bad mistake on the part of

Rob Stringer, who has to worry about Clive and the Germans breathing down

the neck of his unsuccessful business.

Live Nation pulls its ticketing and then you buy a reseller?

Whose side are you on?

TicketMaster is only about the money, it gives nothing back while

continually trumpeting how great its service is.

Soon they’ll only be selling a handful of CDs, and then none at all. And

they failed with their online store. Stop being so afraid of them.

A sad, sad story. If only he were less combative and less about

announcing deals and more about putting points on the board.

There were only ten places. If there were twenty, Kevin would have made

it. The Warped Tour is a juggernaut that never seems to fade. It’s a rite

of passage for teenage boys.

Is it a celebrity magazine or a music magazine?

All print is dying. And "Rolling Stone"’s Website sucks.

Jann Wenner may swing his dick at the Rock & Roll Hall Of Fame, but now

that Madonna’s being inducted, that institution has lost all credibility.

Shit, we need a NEW HALL!

One of the most innovative thinkers in the business, but then why did

major label, but their tour grosses are bad and their profile is

Keep watching Terry. But I’m not sure he’ll lead you to the future. Or,

maybe he’s just going to lead you there too soon.

The MTV tie-in worked for Rock Band, but not Rhapsody.

The public doesn’t understand it, doesn’t think it needs it, and the

There’s something here, but the public doesn’t know what it is, do they,

Zune… Have you been to the social?

Music, when done right, is cool. Microsoft HAS NEVER been cool.

A circle jerk. You don’t break bands there, you just show the usual

suspects what your priorities are. Stay home.

I’d almost want to put them on this list. Because they’ve illustrated

that what people want most is meat and potatoes rock and roll. But that’s

need to impress their friends. Daughtry is Nickelback one step removed.

How come there aren’t a ton more Nickelback and Daughtrys? Maybe with

better material, but playing down home rock and roll?

Many no longer trust it. Its accuracy is in question. How well does it

track indie stores, how about gig sales…sales from Websites?

A barometer that’s losing power every day. Shit, one can just go to the

They need to bring Timothy White back from the dead, it’s the only thing

that can save them. Certainly their endless conferences won’t do the

With Jay-Z hobbled and Russell Simmons turning into a joke, as he

preaches new age bullshit, who will raise and fly the flag of rap?

Maybe Dr. Dre. He’s still got the cred, and he was never flashy. But we

Apple’s "indie" iTunes Store. Log on to iTunes and you feel a coolness.

There’s no coolness at Amazon, it will never dominate the sphere.

As for building a competitor to iTunes… If sale by track was the future,

the business wouldn’t be in such shit shape. But digital sales don’t make

up for the CD shortfall. There has to be a new way to monetize digital, a

Hands can show some innovation in this area.

Sure, music video moved to the Web, but once MTV was the heartbeat of

shit ratings, competing against every other outlet on cable/satellite.

They lost their soul. And soul is the most important element. You can

branch out, go for the easy money, but at some point you’re not going to

stand for anything anymore, you’re going to lose your specialness and

find that your hard core audience, that you felt was inviolate, that you

could depend on, is gone.