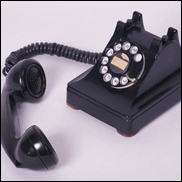 In an era of portability, where you can make a phone call from the top of Mt. Everest, why do the record companies focus on STREAMING??

Cool idea if it’s still 2000, a year before the iPod hit the market, but launching a streaming site now is like AT&T announcing your landline will be advertiser supported. But at least home phones went portable decades ago. Yup, if you want to make a phone call using this free landline service you’ve got to sit in one chair in your house, pointing forward, or else you can’t HEAR!

Tell me you’re delivering ownership for free and I’m pushing the hosanna button, you’ve reignited the Napster fervor, overnight you’ve established the number one site on the Internet, one advertisers will truly clamor to be a part of. Instead, you’ve delivered a commercial atrocity, all about your advertisers and you and not about me, the consumer, the listener, burned out on marketing messages.

I’ll tolerate the ads for free, downloadable music. But to be bombarded in front of the computer to hear a shitty stream… Isn’t that one reason everyone’s left MySpace? Because of the rampant commercialism delivered via a buggy, incomprehensible site?

Ain’t that the music business… A couple of years and a couple of changes behind the consumer. Facebook triumphs, but the labels go with MySpace, because no one with decision making capability actually surfs the Web, actually knows what’s going on.

Telling people to stop trading P2P is like lecturing Bristol Palin on birth control. She’s already pregnant, the public knows how to get free music. You can’t stop it. You can rail against the behavior like a lame parent, bit you’ll be ignored, since you’re so out of touch.


You can shoot a JPEG on your cheap digital camera and not only zap it to a friend, but utilize it as your desktop picture/wallpaper and print it. But Nokia Comes With Music comes with restrictions. Whereas the music everybody’s employing is already restriction free. You want people to go backwards?


Or maybe you’re trying to capture the CD buying public. That’s like selling Twitter to octogenarians. People so out of it, so behind the times that they’re scared of their noses, never mind the future.

And the CD is the labels’ main revenue generator. Not because Apple won’t deliver flexible pricing, but because they refuse to authorize new business models. Radio on demand, in one’s home, in front of the computer, which is what MySpace actually is, is not a sexy alternative to owning what you want and taking it to the beach, to the party, to your workout. Do labels have any idea how people use music? And, if they do, what’s up with the Big Brother efforts to corral us into behavior we abandoned years ago? Entertainment companies are so used to dictating they can’t get used to a changed world where the consumer wags the company dog. You’ve got to give consumers more, not less. At a fair price.

I’m waiting for the day when labels deliver something that the public couldn’t foresee. Like Apple’s Genius Sidebar. When do the labels come up with something that wows us instead of hamstrings us? Ineffectively.

Every new indie band is clamoring for surfers to download their music for free, trying to get traction, and those signed to major label 360 deals are being kept from the kids in an orphanage that can only be visited utilizing heinous restrictions with limited visiting hours. And you wonder why the majors are in trouble. If you cling to the past, you can never enter the future. They’re insisting on 35mm while the country has already moved to digital. And, the country has. Illegal acquisition dwarfs CD sales by a huge factor. The shadow/black market is the real market. The labels just won’t admit it. It’s like they’re a Republican administration fighting the drug war, as their kids toke up on marijuana. Why fight an unwinnable battle?


People want to own. At some point in the future, they’ll rent, music will be a service. When the connection never goes down, when broadband speed is as fast as it is in Korea, when you get complete usability for a low price. But, in the interim, people want ownership. Denying this, the labels have left money on the table for nearly a decade. It’s kind of like Warner’s Estelle experience. They’re never getting that iTunes revenue back, it’s lost forever. Same deal with the labels. Rather than sue moms, they would have been better off charging them. It’s like the RIAA is the Ministry of Reeducation in a world where free thinkers rule.

Apple is not the enemy. Consumers are not either. Just come up with a better business proposition. People will sit through ads for free music. They’ll even pay to avoid the ads. This is the Pandora model, the HBO model. But, the labels want us to go back to over the air TV. When we want to surf on our iPhones.