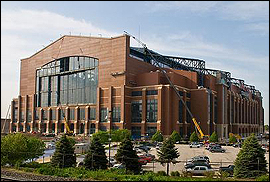 INDIANAPOLIS, Ind (CelebrityAccess MediaWire) — When 52,000 fans packed into Lucas Oil Stadium for the debut concert by Kenny Chesney, Keith Urban, LeAnn Rimes, Gary Allan and Brother Trouble, many of them were dismayed by what they perceived to be the poor sound quality of the venue.

"Terrible, the sound is terrible here. I love the concert. I love Chesney. But the sound sucks," country fan Jennifer Day told News 6 outside Lucas Oil Saturday night. "You can't understand a word they're saying."

The complaints started during the opening acts with fans reporting that the sound from the stage was sufficiently garbled as to make it unintelligible. Stadium officials opened the retractable stadium roof during the main acts and this helped the problem, they said. Stadium officials also worked quickly to relocate some fans to different seats.

"I can tell you that we had several hundred that we relocated. We created a customer service and we relocated some people," stadium executive director Barney Levengood told News 6.

The stadium opened in August of 2008, replacing the RCA Dome as the home of the NFL's Indianapolis Colts. Perhaps fortunately for music fans, the next concert currently on the calendar for the stadium is during the Superbowl halftime show in 2012. – CelebrityAccess Staff Writers