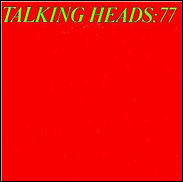 Personally, I'd rather hear a new Talking Heads album produced by
Eno. The Heads were a better fit than Coldplay will ever be.
Because the Heads were more about sound than songs…well, sound
played an integral part. Compare "Talking Heads: 77" to "More Songs
About Buildings and Food" to get the idea. Sure, "77" contained
"Psycho Killer", which spawned the great parody "Psycho Chicken",
but what blew the band up was its cover of Al Green's "Take Me To
The River" on the Eno-produced "More Songs".

What is that sound, that resembles a guitar pick sliding slowly, but
with force, over a guitar's strings? You could listen again and
again and continue to discover quirks that enraptured you. How did
the whitest guys on the planet record a rhythm and blues number
(thanks Jerry!) that sounded more London than Memphis but still
retained so much SOUL! Listening turned you into Gumby. Bending in
places you didn't know you had joints. But moving so slowly you
were on a drug heavier than pot, more akin to an animal
tranquilizer. It's like your feet were stuck to the floor and every
step was an effort, which you didn't mind taking, which you HAD TO
TAKE!

The apotheosis was "Once In A Lifetime", off "Remain In

Light".
Which sounded like it was recorded underwater, but in a world more
intriguing than what was happening on land. If you don't constantly
ask yourself where is your beautiful wife, where is your large
automobile, then you weren't alive back in 1980, when this track
ruled the airwaves on the hip stations that you pledged fealty to,
before the advent of MTV and the resurgence of Top Forty radio.
This was when there was a clear division between hip and straight,
when you were either in on the joke or you weren't, before we all
became members of the monoculture.

But now the monoculture has been blown to bits. Those wearing
pegged jeans and horn rims are still ranking out vapid hits not
knowing that no one cares anymore and the rest of are licking our
wounds, ensconced in front of the big screen, asking ourselves how
did we get here?

David Byrne's been a has-been for almost two decades. He's an
artist as well as a musician. But visual artists don't have quite
the same impact as musicians in our society. But at least he's
aged. In a world where forty sends you to the plastic surgeon,
David Byrne looks his almost sexagenarian self. Even Eno's face has
gone oval. And they've decided to work together again.

Yes, Eno's given up sculpting hits that no longer challenge limits
for U2 to do something outside with his old partner, the one who
truly built his producer cred. I've been reading about it for a
month. When I saw the story in Sunday's "New York Times" (http://www.nytimes.com/2008/08/17/arts/music/17pare.html#
) I winced. The mainstream loves the has-beens. But this is where
my demo goes to find out what they should listen to.

where
you go, not to a retail establishment where the clerks insult you.
Online you find a home, ever-changing in the best of circumstances,
that you can visit whenever you need a HIT, of fresh air! (Thank
you Dino Valente!)

And I didn't expect this modern collaboration to be as good as their
previous one, "My Life In The Bush Of Ghosts". But, I went, because
Ian sent me there. What I liked best about his e-mail was his link
to the Twitter chatter… http://search.twitter.com/search?q=byrne+OR+topspin

But reading Ian's blog about his deal with Byrne and Eno, about how
the company he runs powers the project, http://topspinmedia.com/2008/08/david-byrne-and-brian-eno-releas

e-everything-that-happens-will-happen-today-on-the-topspin-platform
, what struck me was the following:

"I'd run this team against anyone in the business. And we're adding
four more rock star engineers in the last two weeks of this month?
Damn. Look out. Look out."

I don't know who got the story in the "New York Times", that

person
is important. But soon, mainstream mention will be almost
irrelevant, everything's going to the ever-expanding Web, does your
PR person know the Web? How to really work it?

The geeks have taken over the business. Everybody's sophisticated.
Everybody knows the SoundScan numbers, which are published.
Everybody can run a record company. Distribution is a dying gig,
you just pick up the phone and make a deal with Wal-Mart or get the
tracks up on iTunes. Radio promotion only works for those Top Forty
numbers that don't generate careers, that render instant heat and
rain cash only once instead of forever. What is everybody doing at
the label? Is the label even necessary?

The founder of Topspin was responsible for Pro Tools. That's what
truly changed our business, the ability for anybody to make a
record. And even the big boys use Pro Tools now, it's not just for
hobbyists. And then the Net flattened distribution, and suddenly
one has to ask why Doug Morris is making all that money, especially
since he missed the Net revolution.

Point is, if they truly wanted to survive, labels would be hiring
engineers, not more unskilled labor to fill antique roles.

Engineers who are smart, who are closer to the audience than

Jimmy
Iovine can ever hope to be. The future is software. Written by
geeks with a head start on every baby boomer that cannot ever be
made up.

The reason Apple rules is software. There's one visionary, Steve
Jobs, and a bunch of coders.

We don't have a replication of this system in the major label
world. Sony's got a big kahuna who won't even come to the office.
Warner is run by someone who wins via intimidation. EMI is all
about A&R, which might be good in theory, but how does that benefit
artists who can do it themselves?

You can download one song. You can stream the whole album. You can
buy it in FLAC. You can embed it elsewhere online, to help evidence
your religion, spreading the word for Byrne and Eno for free. This
is the future. Not endless reorgs, not 360 deals, the labels have
no idea what's hit them.