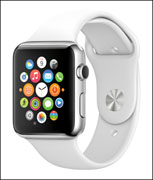 You're gonna have an Apple Watch.

Just maybe not this one.

Christy Turlington Burns is the opposite of nerd culture, and models are only skin-deep, but I get it, you've got to appeal to the fashionistas if you're gonna sell timepieces. Still, couldn't you get someone younger who has something to say?

But what blew me away was the opening, the store in China in a place I've never heard of, called West Lake.

I wanna go there. China, that is. Oh, I know that the miracle has stalled, that the country is faced with so many issues, but it's the bleeding edge of culture, transition is oh-so-fast, and the music business is ignoring it.

Oh, cut the crap with the piracy thing. Have you toured there? Where there are so many people it dwarfs America? Of course not, because you're myopic.

Apple is not myopic.

That's what impressed me. The ability to see beyond.

Kind of like the elimination of ports in the new MacBook.

How come Apple consistently gets this right when in the cultural industries we can't stop lamenting the death of the past. Come on, from "Life" magazine to record stores everybody keeps bitching that we're losing something as we go forward. But not only is Apple trashing the past, it's jumping into the future. Come on, in a wireless device do you really need to plug stuff in? The news has been littered with stories of needing to purchase expensive adapters. But in time you will attach nothing to your laptop, you'll even charge it wirelessly, that's coming. But in music, we're still focused on selling CDs because of the amount of revenue. How about encouraging people to sign up for music subscriptions? Oh yeah, Beats, or whatever they're gonna call it, is gonna fail, just like it did in its initial, pre-Apple incarnation, because you can't charge for what is available for free. When Doug Morris protests freemium, it's like Grandpa Simpson yelling at the movie screen, he just doesn't get it, he looks ignorant, Daniel Ek runs circles around him. That's the story of today's internet, you hook them for free and then… Didn't that cause the sky high valuation of WhatsApp and Snapchat? But count on the music industry to avoid this…believing if we can just go back to the past, we can win.

At least HBO is going into the future.

The real story is you can cancel the TV portion of your cable, but you're gonna pay the same amount anyway, just for internet. Watching this presentation made me want to call Time Warner and cancel HBO, the new app is much more usable, but I know TW is gonna give me some bundle talk and will actually tell me my rate will go up if I drop HBO. Hell, my rate went down when I added voice-calling.

But at least HBO realizes it's got to play to the customer, got to face reality, whereas even at this late date the music industry is about placating the middleman, i.e. physical retail.

As for the MacBook… How come Apple can hook us with "Making Of" videos and we don't even do this in the music industry. That's right, Apple is playing to the hard core fan, because that's who spends the lion's share of the money, that's who the evangelist is. The hard core fan watches all the bootleg videos on YouTube, you can cut off the flow of information, but only to spite your face. Why can't we learn how Pharrell wrote "Blurred Lines" without him having to testify in court?

As for the Apple Watch…

It's about functionality. That's what those in the entertainment industry cannot understand, usability comes first. This is why I must laud HBO and castigate its competitors. To protect your business model you're making it difficult to consume…your customers, your lifeblood, revolt. The truth is the Apple Watch has so much functionality that you're gonna be addicted to yours.

You didn't need a smartphone.

Furthermore, the smartphone was bigger when cellphones had been shrinking.

The Apple Watch is geeky and too big, but that was the size they focused on for functionality.

Is this the final iteration?

The original iPod held only 5 gigs, used a hard drive and had a scroll wheel that actually scrolled.

Mere months later they doubled the storage. They eventually shrunk it. They went to flash storage. Then they killed it with the iPhone.

This is just the beginning of the story. Apple has to see which model people want to buy. Remember the original iMac, which came in one color and then many and then was killed and only came in one flavor in a new design?

You make mistakes when you move forward and take risks. The pros adjust.

And don't you understand, the fact that you've got to use the Watch with the iPhone is a FEATURE! It's about getting you into their ecosystem, locking you in, the same way iTunes locked you into the iPod/Apple system and its seamless sync/operation got you to purchase more Apple product. Of course there will be imitators, but Apple was there first! And there's a first mover advantage.

Oh, that's right, there was the Pebble and some Android watches… But their functionality was so low it's laughable. Apple is about getting the category right.

But, 18 hours is too low for battery life. I frequently stay up longer than that in a day, I don't want my watch to die.

But I'm gonna buy one. Because I've learned over time that the first iteration now works. And by delaying, I'm just gonna lose usage, lose happiness, be left out. So, I'll throw down four hundred bucks and then throw down the same amount a year or two later, that's the way it works, you get a new phone every two years, right?

And forget all that b.s. about the old phones being good enough. The iPhone 6 has Apple Pay, you want to be able to pay with your watch, right?

These are all things you're gonna do in the future. Use your wristwatch like a Dick Tracy device, eliminate all that wasted energy removing your smartphone from your pocket…

Forget all the hogwash in the news. Those are jaded pricks who are all about finance. Who even cares if the Watch is a failure in its initial incarnation. So was the Mac, and one can argue the iPod was too. But then they were refined and took hold.

Steve Jobs's genius was such that he got us to buy the first time out, upon announcement. This is a big change. Something the music business used to have, with bands, we bought the next record without hearing it first. Now we don't even expect the next record to be any good.

But also like the bands of yore, Apple is in it for the long haul. And with a small seamless team, you can perform miracles.

Do they miss Steve Jobs?

There's no charisma in the presentations. And I don't have faith the company will continue to sustain its bleeding edge position.

And I applaud them for it.

And if you watch this presentation, you'll be bored a bit, but you'll also be wowed.

Steve Jobs may be dead, but the reality distortion field lives.

If you don't want one of those MacBooks…

If you're not thinking about a Watch…

You're just an Apple-hating Luddite.

I get it, you're smart and need to be an individual.

Or you're cheap and believe in "good enough."

But Apple has got a core audience so large, it's made them the world's most valuable company. Criticize all you want, but isn't that what you're looking for, world domination?

Bands used to achieve this.

But now they're me-too operations whored out to corporations.

I'm cutting out the middleman, I'm going straight to the end goal, I'm a believer in Apple more than any of the musical acts.

Because I revere intelligence and the ability to risk.

I know these people. Some literally, most figuratively. The ones who weren't the quarterback, weren't popular, but stayed in school knowing it was their only way out.

They're changing the world.

Remember when bands did this?