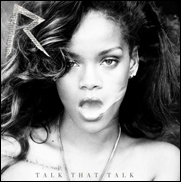 Artists are supposed to lead, not follow. How come they're still making albums?


Did you see that Rihanna topped the British charts last week after selling 9,578 copies of her album "Talk That Talk"? This in a country of 60 million! It was the lowest sales number in history!


People only want the hits.


Now this is not true of everybody. Are there still people purchasing the long player and spinning it ad infinitum, learning every lyric? Of course! Just like there are still people buying CDs, purchasing vinyl and composing letters on a typewriter. The album is the sideshow.


And so is vinyl. It's a trend so small, without the mainstream press none of us would even be aware of it. Of course vinyl sounds better, but it's inconvenient! Just like landlines sound better than cell phones. But you don't see people forgoing calls outside the home, hell, they're canceling their landlines, using mobiles in their abode!


While you were busy in the studio, concocting your long player, figuring out the running order, designing the cover, divining the perfect release date, you were functioning in a bubble. That's not how anybody listens anymore.


You want to know how they listen?


They pull up your track on YouTube. Whether in an authorized version on Vevo or a bootlegged take posted straight to YouTube. And they instantly decide whether they like it or not. And if they don't, they forget about you. Just that fast. It's like they're carrying your album straight to the dumper. As if you walked into McDonald's, sniffed and left and they threw all the food out and closed the doors. As for listening to all twelve of your tracks, are you nuts! Don't tell me people have a short attention span, hell, they're marathoning "Breaking Bad" as I write this. They just don't have time for what is not exceptionally great, and if you can tell me ten albums from the last two years that are good from beginning to end, I'm all ears.


Listening has changed. It used to be entertainment options were limited. You bought little and played that which you owned. And it's not only music, newspapers are competing with blogs, TV is competing with YouTube, everything's changing, are you?


Assuming you want to break out of the wannabe ghetto.


Just like in the U.S., where the middle class is evaporating, in art there are winners and losers, rich and poor, which side are you on? It's okay if you want to be a journeyman, eking out a living. Hell, maybe you're making a few bucks, but don't expect to become any bigger than you are. Not unless you make an undeniable track.


And that track no longer has to be Top Forty beat-driven fodder. That's what "Somebody That I Used To Know" taught us. That the world is not controlled by gatekeepers. You can't make it if you really try, but if you try and try, and create something undeniable, you can.


And the public is going to discover it on YouTube! Radio comes last. Hell, radio's been last ever since the advent of MTV. It's a coalition of followers, detached from humanity, losing power every day.


1. If you're a wannabe, feel free woodshedding, put online as much as you want, no one's paying attention anyway. You're just hoping to get lucky. Chances are, you never will. But this woodshedding and the online response allows you to explore and possibly find your niche.


2. If you've already made it, there are two tiers of material, throwaway and highly-hyped. Don't put a full court press behind anything that is not truly stellar. Everything else is a glimpse of your methods. Kind of like a rapper's mix tape.


3. If there is an album, it's an after the fact event. A collection of what's already been exposed. Kind of like the NOW series, except it's all been done by you.


4. Labels are focused on revenues, not careers. They want the album to live because of its high price and the attendant marketing that drives people to buy it. They're sticking to this paradigm the way a five year old continues to suck on a pacifier. It's a no-win situation, but they don't want to let go.


6. It's a streaming world. Don't focus on Spotify or MOG, you're too stupid to understand where we're going, hell, you're living in the past. Those services are ahead of the game, you're behind. Just look at that Nielsen report that said the number one listening outlet for teens was YouTube. YouTube is streaming. Just like Jessica Seinfeld mixed vegetables in cookies, YouTube has been selling you streaming and you're too ignorant to know it. YouTube is an on demand item. It's pull technology. Feed it. You do this by creating something people want to pull. And that requires either train-wreck novelty or quality. And you can marshal your troops to go there, but this doesn't work more than once if the music isn't good. As for mainstream press… Asking the newspaper to drive people to YouTube is like asking NBC to tell people to cut the cord and watch online video. It's like telling a right wing religious zealot to have an abortion. It's a disconnect. Expecting old media to change is to believe Coleco is going to rise from the ashes and return triumphant.


7. The cycle has shortened. Your public can handle new music every other month.


8. It's about the performance. It's about live. Not because the ticket prices are high and you can make dough there, but because it's the one place where the audience can expect something new, different and alive. If you're playing to hard drive, repeating your record, you're missing an opportunity. What an audience likes most is a special show. A different set list. A special guest. This is the essence of the Grateful Dead's career. Every show was a unique event. And just like in the heyday of the Dead, great shows live on, with recordings. They embellish your career, they don't kill it. They make people want to go to the show and have their own magic moments.


9. All bets are off. Your music doesn't have to sound like anybody else's. It's just like the seventies, when Warner/Reprise ruled. We want unique. As media conglomerates merge, the public is running away. That's what the Web is all about. Feed the people, not the machine.


"Nielsen: More Teens Now Listen To Music Through YouTube Than Any Other Source": http://techcrunch.com/2012/08/14/youtube-is-for-music/