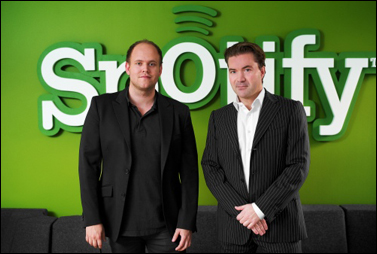 Martin Lorentzon couldn’t stop saying how much he loves L.A. Because in the winter in Stockholm, it gets light just before nine and dark again around three, and that’s just too little daylight, for too little time. If only winter were a couple of months shorter, it would be tolerable.

Then again, Sweden’s got better cell service. You don’t get the dropouts we do in America. And the tech companies are more open.

Speaking of tech companies, Martin made a mint. After working for Alta Vista in San Francisco back in the nineties, he started a company in Sweden that…let’s just say it counted data. I’m afraid most people reading this wouldn’t understand it if I explained it. And there’s your digital divide right there. People who like to win on intimidation and those whose educations allow them a superior vantage point, enable them to move mountains, change worlds, make tons of money.

And Martin put his millions in with Daniel Ek’s and they founded Spotify. Which the labels were glad to extract an advance from, but were surprised actually launched and was successful.

Are you following their latest products? Wherein you can download 3,000 odd tracks to your laptop or mobile device? It’s just like owning them. Of course, you get this privilege only if you sign up for the premium service.

And they’ve got software for not only iPhone, but Android and soon BlackBerry, they’re the anti-Apple, they’re not a closed system, they want to play with everybody.

And they just might end up dominating. If the labels will realize that streaming is inevitable and play ball.

Oh, they’re playing ball so far. That breakdown that hit the Web re Spotify’s costs isn’t accurate, they’ve got special deals with the labels, but they don’t go on forever, Spotify’s got to prove its mettle, it has got to generate profits.

A couple of days back, Martin Lorentzon e-mailed me, he was in town, did I want to get together?

Normally, I say no. It’s a one way street. You demonstrate your wares hoping that I’ll help you out. But Spotify is revolutionary. I was intrigued. But I wasn’t sure of the agenda.

So I showed up at the Mondrian today to find a well-dressed man of forty, voluble, polite and excited. Not a passive manipulator, but someone intent on ingratiating himself.

And after catching up, hearing a bit of history, Martin’s iPhone rang. I could see it in big block letters. It was Daniel Ek. He was coming down.

Spotify employs P2P software, that’s why it’s so damn good. It takes 2-5 seconds to ramp up each and every song, which has reduced bit rate during that window, but usually that’s a relatively dead window and the listener isn’t paying close attention anyway. Yes, there are tricks. Only seventy five percent of the song is downloaded, an algorithm provides the remaining twenty five percent. This is how they all do it, it’s de rigueur. And the files don’t only come from Spotify’s servers, bits and pieces come from other users with the software installed on their computers. Net effect? It feels like you own the track. Usability is equal to iTunes. You can fast forward, rewind, there’s no lag time.

But that’s on your desktop. What about your mobile?

Well, that’s a bit different. You see then Spotify depends on the network. Which is why they’ve limited sign-ups in the nations they’ve already launched in. They want the streaming experience to be perfect on your mobile device, after all, you’re depending on it, their servers and their wallets cannot be strained.

But if you want to pay, you can get Spotify instantly.

And in order to use the mobile app, you’ve got to pay.

And when you do pay, you can download the aforementioned 3,000 tracks to your hard drive too, which truly is like owning them. Of course, if you stop paying, you don’t own them. But if you start paying again, they return magically.

Daniel was focused on the rental issue. Needing to make purchase available too. I think that’s bullshit. You can’t listen to the hoi polloi. In America we rented movies on videotape, bought them on DVD and are now renting them again via Netflix and Redbox. Who says America is anti-rental? It’s all about the user experience. And the Spotify user experience is so good, that you don’t need to own once you’ve got it.

But what about Apple?

Martin and Daniel wonder too. Why exactly did Apple approve their app? They gave it a 50/50 shot. But Cupertino said yes. Was it because Apple was worried about the backlash or Apple just doesn’t care that much about music. Better to take thirty percent of apps than the small margin in music. Then again, since the Spotify app is free, there’s no gross to skim from. Then again, you can’t stream music in the background on an iPhone. If you go to write an e-mail, you lose Spotify. Whereas you can listen to your iTunes library while you surf on your iPhone. All of which begs the question, will Apple compete? Will Apple suddenly roll out a streaming service? The guys at Spotify DON’T KNOW!

But someone will. Streaming is going to rule. It’s just a matter of when.

So when do we get Spotify in the U.S?

At the end of this year or the beginning of next.

Oh, I get it. These guys are in way over their heads. They can’t get it together. They promise, but don’t deliver.

Absolutely wrong. They could launch tomorrow, they just don’t have all the rights. You see a certain company doesn’t believe in free. So, they won’t let Spotify launch with the European model. But, without the free element, is Spotify doomed to fail?

Believe me, Spotify wants people to pay. They want to integrate so many desirable elements into the paid model that you’ll want to pay. Being able to see what stars are spinning, what your friends are listening to. Yes, merging social networking elements with music, something absent from iTunes. But you can only convince people to pay if they get to try the service out. And so far, other than a handful of the connected, no one in America has Spotify, few even know what it is!

Daniel felt this was a problem. He had to convince the community, the artists and executives. I laughed. This is like MTV. Once you see it, once it launches here, word will spread like fire, people WILL WANT THEIR SPOTIFY!

Daniel feels he could have 50 million users almost instantly. But it’s too soon. He doesn’t want to risk messing with usability and doesn’t want to burn through the company’s cash that fast. Yes, it costs to stream, not only server power, but licensing fees. Also, he wants to tweak the service. They showed me some unreleased elements, but they’ve got tons more. They want to build it so you will come.

Ten years ago, the techies were arrogant. They wanted to rip off the music industry’s wares. The Spotify guys are different. They want everybody to make money. But they want the time and support to make it happen. Honestly, they’re not exactly sure of the business model, they’re figuring it out. They want most people to pay, they want different tiers, but the customer is king, you’ve got to serve the customer. Which the music business has not done in eons.

They are in it for the money. But shouldn’t the music industry love them for this, feeling the same way?

They’re smart. They know tech. They don’t intimidate physically, they make their moves via their intelligence, which flummoxes the music industry. An industry that likes to bully and rip partners off.

But is that paradigm truly sustainable? In an era where the customer is savvy enough to steal whatever he wants? If you think free availability of music can be eradicated, you don’t know dick about computers. The only answer is a better mousetrap. Spotify is the first step.

Most people bore me. It’s all about them. They want to tell me how great they are, why I should endorse what they’re selling. But I was positively riveted for two hours. I felt like I was at ground zero of the music industry. Right there at the source. Better than meeting Bob Dylan, who doesn’t talk much anyway. Better than hanging with the rock stars of yore who feel they’re entitled, never mind the underschooled and inexperienced nitwits of today. As for dealing with the label people, other rights holders, it reminds me of the sixties, there’s a huge generation gap. My eyes roll back in my head, I just can’t waste the time. But today, in the lobby of the Mondrian Hotel, I was excited. These guys want to deliver more music to more people and get them to pay for it! And the service is so good, it is worth paying for.

So I don’t want to hear one naysayer. You can still sell tracks at iTunes as a hedge, you can even sell CDs. But streaming is the answer and these guys are the cutting edge. They wanted the conversation to be off the record, but I insisted it couldn’t be, word has to GET OUT!

P.S. Let me make this perfectly clear. If you’ve got the premium service, you’re not reliant upon a wireless connection to listen to music. You can download a little over 3,000 tracks to your mobile permanently (as long as you continue to pay, of course). So if you’re in a dead zone, or camping in Timbuktu, you can listen to your music – as long as you can keep the battery of your mobile charged! (No, your music doesn’t disappear if you run out of juice, the songs remain, but without power, you’ve got to bang on rocks, you’ve got to make your own music!)

Free: The Future of a Radical Price

The guy’s been beaten up so heavily regarding the Long Tail that his new book has been ignored. But check it out. Primarily because it explains the concept of "freemium" upon which Spotify is based. I’ll reference the Wikipedia article here:

But Anderson does a much better job of explaining it. Giving numerous examples. As for being afraid of the future, free’s been around for eons, Anderson makes this clear. Stop being afraid of losing what you’ve got and start figuring out how you can make it in the future by reaching so many more people!