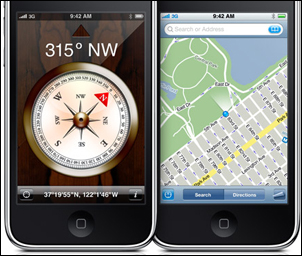 There’s the news… The new MacBook Pros and iPhones, with the concomitant price drops. But what wowed, in typical Apple fashion, was software.

Ever lose your phone?

Well you can dial your misplaced iPhone, make it beep, display a message where to call you to redeliver it and if you’re truly paranoid, you get the ability to delete all its contents, WIRELESSLY!

Or maybe it’s the ZipCar app… Wherein not only does it locate your car, IT OPENS IT!

Or maybe it’s the voice control… Which not only lets you command calls, but operate iTunes, telling it to play songs SIMILAR to the ones you just heard.

The Palm Pre is no competition. Not only because of features (yes, video on your iPhone with the ability to transmit the results is quite astounding), but because of the installed base and the available apps.

There are almost no apps for the Pre, because the SDK (software developer’s kit) was not ready. Then again, iPhone apps dwarf those of Android and RIM, BECAUSE OF THE INSTALLED BASE!

The key to the success of the app store is not the iPhone so much as the iPod Touch, which allows EVERYBODY to play. To the point where there’s now an installed user base in excess of forty million. TRY COMPETING WITH THAT!

And speaking of competition, via peer-to-peer technology, you can now play games with unknown people in your vicinity. We live in a social society, if only you could send SONGS this way! Imagine how it would boost careers!

But the rights holders want to jet us back to the nineties, whereas games are all about the now. And now anybody can write a game app. And get paid. Kind of like in the music business… Although the getting paid is harder, since we’re married to an ancient model.

And while the major labels worried about Apple’s power in the music industry, music is now a footnote in the company’s portfolio. The iPhone would function just fine WITHOUT music! You’d think rights holders would wonder how they could integrate music MORE, instead of leaving it out… Where is the Spotify app, which has been created yet not approved by the rights holders? God, everybody would be talking about music THEN!

And not only the Spotify app, but the TICKETMASTER APP! Wherein you show the bar code on your phone, and you get in! Much better than credit cards. Nine year olds have cell phones, but not credit cards… Apple wouldn’t cough up a piece of the company in return, but maybe they’d execute one of their ubiquitous ads, burnishing Ticketmaster’s image so the government would allow the ticketing company to merge with Live Nation.

The presentation in San Francisco today was a geekfest. And what mainstream media, and especially the music business, don’t understand is the world is now run by geeks! A dumb band excoriated by Perez? You get publicity, but no real traction. A tech-savvy band where the members tweet and develop their own apps and interact with their fans on an intelligent level? THAT’S GODHEAD!

Oldsters tend not to get it. That the key to the lives of youngsters today is ACCESS! They don’t believe in walls, they want to be able to reach out and touch EVERYBODY! If you erect a wall, young people ignore it, or destroy it, just to let you know who is boss. You may think the iPhone is a toy, but it’s a communications device! It allows you to be in touch with the world EVERYWHERE!

While newspapers are trying to pull content back, while labels are trying to get performers on late night shows fewer and fewer people watch, youngsters are cutting the cord on cable, and relying on their handsets to explore the world.

Will Apple dominate in the future?

The lesson of Microsoft/Windows would say yes. That even if Apple slips and it’s not the best, their market share DOMINATES!

But it’s not important whether it’s Apple or someone else. A line has been crossed. People now expect more, not less. They’ll pay if you deliver the goods, but they expect a hell of a lot for free.

If you want to compete with Apple, you’ve got to be just as good.

What I mean is if you’ve got a pretty face with one track scored by a hitmaker and nine lame follow-ups, you’re toast. We live in an age of EXCELLENCE! The customer decides. They decide which apps are popular and make money, and which ones don’t. They decide which acts are successful, and which ones aren’t. The purveyor has less ability to steer than ever before. You’ve got to start with quality, all your marketing efforts are naught without it.

Last week the online buzz was about a fan who was streaming a Phish gig live from his iPhone. I go to concerts now and find people are tweeting about what I’m experiencing faster than my fingers can tap out my feelings on my BlackBerry. There’s now going to be viral video DURING THE SHOW!

Stop holding back. Jump in. And know that whereas I used to read "Rolling Stone" cover to cover, needing to get closer to the bands, today I just blew two plus hours watching highly-educated geeks illustrate the future, which is only DAYS away!

In other words, tech is what music used to be. It’s the tribal drum. It’s where we direct our attention. It’s cutting edge. It’s exciting.

Music was driven straight towards a cliff. While the labels bitched about theft, not only did they lose fifty percent of their sales, they lost their hold on America, THE WORLD’S, psyche! Businessmen married to the past ceded control to techies pushing the envelope, always trying to deliver the future before the public even knew it wanted it.

That’s what the music industry used to do. Deliver cutting edge acts that we didn’t know we wanted, but came to LOVE!

What a long strange trip it’s been, from the locomotive to the caboose, from the pantheon to the scrapheap.