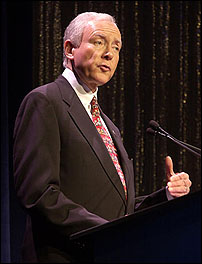 Thank you very much for inviting me here today. I always enjoy my visits to the National Press Club or, as we call it in the Republican Cloakroom, the Lions' Den. Most of you probably expect an Orrin Hatch speech about intellectual property to denounce the all-too-common practice of stealing music over the Internet. Stealing music is indeed unlawful. It is also wrong.

A few months ago, however, I caused a stir when I suggested that people who illegally download music should have their computers blown up. Judging by the press – and my mail – I struck a nerve. With that provocative statement, I wanted to spark a policy discussion about serious consequences for serious actions. And today, I'm going to fast forward to what might come next.

The more I think about artists and technology, the more I am concerned that the music industry's lawsuits against consumers may very well lead to a litigation explosion that could seriously damage the country's high-tech industry.

Let's start with a few basics. Intellectual property, or IP, is legalese for the protection of creativity. The biomedical research industry, for example, is supported by the patent system. The computer and entertainment industries rely upon copyright protection. Songwriters, scientists, software engineers and many others depend on IP. And, depending on your definition of songwriter, that would include me!

I vividly remember my friend Jack Valenti warning some years ago that improvements in computing power would mean that pirated CDs downloaded from the Internet would soon replace pirated videotapes. He was right.
I am one of those old school law-and-order types who is skeptical of the term victimless crime. With apologies to Gertrude Stein, a crime is a crime is a crime. And make no mistake about it, software, music and film piracy are crimes. And there are victims. It may even go much further than most of us once thought.

It is common practice today for children to download free music. Like the mythical free lunch, however, there's no such thing as a free CD or movie. Allowing your children to illegally download a CD is actually worse than shoplifting from a record store. It's like them shoplifting and then leaving your credit cards and house keys behind. Anyone who finds them can steal your identity, ruin your credit, rummage through your personal information, and expose you to civil and criminal liability.

Let me explain. Imagine a conversation with someone about a CD. "The best thing is that it was free. I downloaded the music with some of that filesharing software." "It was really free?" you ask. "That sounds like a pretty good deal."

He thinks for a minute and says, "Well, I did have to disclose all my Internet

"And I had to give out my financial and tax return information. Oh, and I had to let interested folks read the love letters I e-mailed to my wife."

"Oh," he says, "I found one pornographic picture down loaded to my computer. That was bad enough, but then some kid downloaded it from my computer, and now I'm being prosecuted for distributing pornography to minors."

"Then the singer of that song hauled me into federal court and sued me for $50,000 in statutory damages, plus all of her court costs and attorneys fees. I had to hire a lawyer for that, but the good news is that my lawyer gave me a package deal. He's also representing me in my criminal case."

"That free music had a hefty price tag."

Ordinary, well-meaning Americans are beginning to get hurt. We have all been following the latest civil actions brought by the Recording Industry Association of America. Courts are imposing judgments against individuals for copyright violations. Soon those people – victims of the way peer-to-peer filesharing software is currently configured and employed – will seek redress for their injuries. They will take their cases to creative trial lawyers.

At first, the lawsuits will be against the companies that own and operate the Internet sites that offer peer-to-peer software for downloading. Those companies, which are making little, if any, money under their current business models, will quickly go bankrupt, either by losing those lawsuits outright or sinking under the cost of defending themselves.

Then the trial lawyers will search for another deep pocket. They may look to the creators of the software. Then to the Internet service providers who sell the connections to the Internet. Then to the companies that manufacture, sell and distribute computers, routers, and peripheral equipment.

Why should Microsoft, Intel, Verizon or Cisco be responsible when using their products for their intended purpose costs people money, psychological harm, and perhaps even criminal convictions?

Well, I'm not saying they should be. As a veteran of the tobacco and asbestos litigation wars, however, I'm just saying that nothing surprises me anymore.

A few years ago, after all, people said the trial lawyers would never win a single suit against the tobacco companies for selling a product that everyone knows is dangerous. That's just one example, but there are many more.

He was also responsible for the operations and growth of Musicentre Productions, the in-house entertainment and production arm of the company.

As many of you know, I have been working very hard over the past nine months trying to solve the asbestos litigation crisis, which has bankrupted 200 companies and counting, and taken a human and economic toll now in the many billions of dollars. Lawsuits concerning asbestos liability started, understandably enough, against the companies that manufactured asbestos. The litigation bankrupted those companies, so lawyers sued companies that used asbestos in the workplace.

As those companies went belly-up, the next wave of suits targeted companies even more remotely removed from the original manufacturers. Today, companies that have never produced, used, or directly touched asbestos are getting sued and hit with court judgments.

With all due respect to the fine people with whom I have been negotiating a $100 billion asbestos settlement, the thought of one day having to do the same for the high-tech industry makes working on judicial confirmations downright fun.

How might a plaintiff's lawyer tie high-tech companies to the damages caused by peer-to-peer filesharing? He might argue that the high-tech companies know their products are being used to steal music, invade privacy, collect personal information, and distribute pornography. Yet they have neither warned consumers of these dangers nor taken steps to prevent such outcomes.

Some argue that the current cycle of computer upgrading is driven by people who want computers that can do everything from using broadband connections to the Internet, storing large hard drive files, and burn CDs of downloaded music, to playing stereo-quality music and downloaded video clips. Analysts have repeatedly called peer-to-peer filesharing the killer application driving consumers to buy broadband Internet access. These are the very services and devices that the high-tech industry is manufacturing, advertising and selling.

The industry knows that adults are signing up for broadband and buying new computers for their kids, and that most of those adults don't know everything their kids will do on those computers. The industry knows that the popular peer-to-peer sites such as KaZaa, Grokster and Morpheus are using software that can expose consumers to the dangers of copyright liability, identity theft, viruses, and pornography.

Worse yet, the corporations that run these networks try to shield themselves from liability by using kids and other unwitting consumers to distribute pirated music and pornography across their networks. As all of you know, consumers who read newspapers or watch television don't know and have never needed to know about the complex legal duties that you face as creators and distributors of mass media.

So how dangerous is it for kids and unwary consumers to use filesharing networks to turn their home computers into amateur distribution shops? Let me give you one example: An adult downloading one piece of legal, adult pornography over a peer-to-peer network can easily become an amateur pornographer facing criminal prosecution.

Imagine an adult who installs the software as recommended and then downloads just one of the millions of pornographic images or videos on that network. Imagine also that it is perfectly legal for an adult to download and view this particular image. But remember, our adult has now made that pornography available for distribution from his computer to any of the millions of other users of that network.

And one recent study shows that perhaps 40 percent of those users are children. Both state and federal laws criminalize the distribution of pornography to minors, so nothing but dumb luck stands between the unwitting adult and the shame, stigma and jail time of a conviction for distributing pornography to children.

The good news is that, while this scenario is possible, it is not inevitable for two reasons. First, as soon as the high-tech industry connects the dots and understands the potential risks, they should come to the table and help resolve the current impasse between content owners and free downloaders. Second, the knowledge of so-called free music's high price creates an additional incentive for people not to choose that path. I believe that the judgment and decency of properly informed American consumers and music creators will prevail.

I hope that today's popular illegitimate filesharing will some day be a thing of the past. In its place, legitimate online music services that use very different network architecture will offer safe, legal content for a fair price.

I ask the press, copyright holders and high-tech companies to join me in educating citizens about how today's filesharing can endanger their privacy, their financial security, their reputation, and even their freedom. I also want the technology industries to work together and with policy makers to develop approaches ensuring that consumers – especially parents – will be fully informed about the dangers of illicit filesharing. I am now developing legislation to help consumers recognize and avoid these dangers. Balancing the competing interests will be challenging, but essential if we are to protect American consumers, artists, and technology industries. –Bob Grossweiner and Jane Cohen