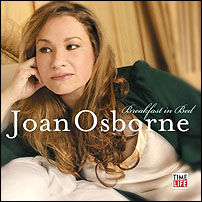 FAIRFAX, VA (CelebrityAccess MediaWire) — Rocker Joan Osborne has signed with Time Life to distribute her next studio album. Time Life is a somewhat surprising choice for Osborne as they are a direct-marketing business rather than a more traditional label.

The album, "Breakfast in Bed" is due on May 22nd and has been described as an homage to Soul and R&B classics of the late '60s and early '70s with both new material and re-imagined versions of classic tracks from the period.

Osborne first gained notoriety for her 1995 album "Relish" featuring the single "(What If God Was) One Of Us" which propelled the album to sell 5 million copies worldwide and net Osborne 6 Grammy nods. Since then, she's ventured into the country world and performed as a member of the Greatful Dead as well as touring with the Dixie Chicks & The Funk Brothers.

"I am delighted to be working with Time Life on Joan’s new album," says Osborne’s manager, David Sonenberg of DAS Communications Ltd. "To have the opportunity to advertise on television and sell directly to Joan's fan base is a luxury that rarely happens when dealing with traditional record labels."

Time Life has been trying to recast itself in recent years. Billboard reported that the label had been bringing industry talent into the fold, people such as A&R man Bas Hartong from Polygram and trying to beef up its catalog with recognized artists such as Osborne.

"We are taking a classic American brand and expanding it," said Mike Jason, a senior VP at Time Life told Billboard "This allows us to raise the company's profile in the archive and retail areas." – CelebrityAccess Staff Writers