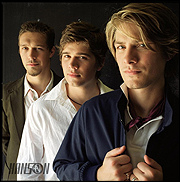 COVINGTON, KY (CelebrityAccess MediaWire) — Outback Concert's David Zink aroused the ire of the local constabulary in Covington when he led the band Hanson and a group of fans on an unlicensed parade.

Hanson, a former boy band best known for its 1997 chart hit "Mmm-Bop" has been holding marches before their shows to draw attention to the rising tide of HIV/Aids and poverty in South Africa. In Covington, approximately 100 fans joined the band for the walk, leading police to issue a citation for Zink, charging him with leading a parade without city permit, a misdemeanor that carries a maximum penalty of $250 in fines and 30 days in jail, the Cincinnati Enquirer reported.

"This is the 54th city they said they did – and never had to get any kind of permit to do it, have never had any issue," Zink told the Enquirer "The city of Covington apparently are the only folks that are with-it enough to understand the full impact of the Hanson barrage."

The Enquirer reports that a representative of the Madison Theatre, where the band was slated to play, approached the city about an hour before the walk trying to obtain a permit but was refused as permits should be obtained at least 30 days prior to the event. Covington Police Chief Russo then met with Madison Theater Chief Executive Officer Esther Johnson and Zink and told them that "If you do this, here's what we plan to do: We will cite the promoter for organizing it, and then doing it."

Its all in the hands of the courts now however and Zink will have to return next month for a court date to resolve the matter. – CelebrityAccess Staff Writers