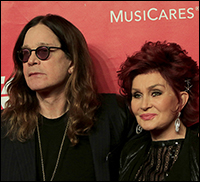 LOS ANGELES (CelebrityAccess) — Rocker Ozzy Osbourne has hit promoter AEG with a lawsuit, alleging that the company’s ‘block booking’ policy is a violation of the anti-trust Sherman Act.

In the suit, first reported by Billboard, Ozzy alleges that AEG engaged in “blatant, anticompetitive conduct” when they tried to force Osbourne to perform at AEG’s flagship Los Angeles venue The Staples Center in exchange for allowing him to perform at the O2 Arena in London.

“In early 2018, Ozzy’s UK promoter, Live Nation (Music) UK Ltd., sought to book the O2 for Ozzy’s final world tour, known as “No More Tours 2.” Live Nation UK requested a date in February 2019, which AEG said was available—but only on the condition that Ozzy be bound by the Staples Center Commitment. Sharon Osbourne, Ozzy’s wife and business manager, publicly complained about having to sign the Staples Center Commitment, but AEG would not relent,” the complaint said.

The suit, filed in Federal Court in Los Angeles on Wednesday, seeks class-action status, which would open the door to other artists who have been hit with the alleged “Staples Center Commitment” to join the melee.

Ozzy’s lawsuit is the latest twist in an ongoing dispute between AEG and Azoff-MSG, a partnership between Madison Square Garden and veteran manager Irving Azoff, which oversees The Forum in Los Angeles, a key competitor for AEG’s Staples Center.

Last year, AEG competitor Live Nation UK lodged a complaint with England’s Competition and Market Authority, asking them to review AEG’s block booking policy, but after some months of consideration, the regulator declined to pursue the matter.

He’s also seeking compensation for his legal fees and costs from the lawsuit.