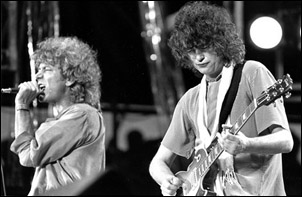 LONDON (CelebrityAccess MediaWire) — According to Jimmy Page, his finger is on the mend and will be in fighting trim before the December 10th concert date, Reuters is reporting.

"I suppose something like a Zeppelin reunion wouldn't be right without a bit of drama," Page told Reuters during an interview "I'm able to do what I ought to be able to do, it's just a bit bruised and a it's bit painful still, but with this two weeks' postponement … it's going to be fine."

Page also dropped some hints about what fans might expect at the event, including mention of a brand new track to be performed publicly for the first time at the concert.

"There's one number that we rehearsed, I assume that it will make it to the Dome, that we never played at any point in time." Page said, referring to the track written during the band's heyday "It's a really intense number."

Page has also hinted at the idea of a longer term reunion after the concert. Most observers believe that Robert Plant, who has enjoyed significant solo success, would be the biggest obstacle.

This will be the one of the first times that the band has reunited since their breakup in 1980, bringing original band members, Jimmy Page, Roger Plant and John Paul Jones back together along with Jason Bonham, the son of original member John Bonham, the drummer who's death was one of the precipitating factors in the band's dissolution. – CelebrityAccess Staff Writers