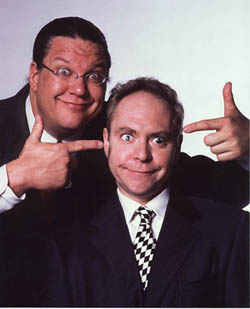 When Penn & Teller inked a $1 million signing bonus from the Rio All-Suite Hotel &
Casino in Las Vegas, they wanted it in quarters so they could use it for
a stunt to show Vegas that Penn & Teller had arrived. According to the duo, the
"cheapskates" at the Rio only came up with $999,950. Not
wanting to niggle, Penn & Teller invited 100 dignitaries
and press representatives to each bring two quarters to turn
their 3,999,800 quarters into the measly 4 million quarters
Penn & Teller asked for. So a 225-cubic foot Plexiglas and steel container was
filled to the brim with 25 tons of quarters and attached to a
120-foot boom crane at the Rio.

"Not only have we once again cheated death in a spectacular way," said Penn, "we also don't have to worry ever again about getting change for the Laundromat!"

Penn & Teller can be seen nightly, except Tuesdays, at 8:30 p.m. in the Rio's Samba Theatre. Tickets are priced at $65 plus tax.