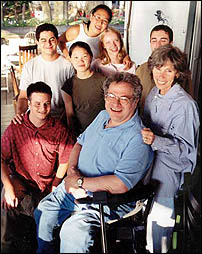 (CelebrtyAccess MediaWire) — The Perlman Music Program and the Florida West Coast Symphony have forged a partnership to bring a unique two-week winter residency program for gifted musicians, ages 12 to 18, to Sarasota, FL in December.

The Sarasota residency will be an extension of The Perlman Music Program's six-week summer residency on Shelter Island, NY that includes extensive coaching and performance opportunities for some 35 students from around the world. The faculty includes Itzhak Perlman. Co-founded by his wife Toby in 1994, the program is designed to be an enriching experience for the participants on both an artistic and personal level. The students study violin, viola, cello and piano.

While the Perlman Music Program has toured and held residencies in China and Israel, Sarasota will be the site of its first American winter residency, which will run from December 19–January 2, 2005. A typical day will be private practice in the morning, followed in the afternoon by rehearsals for string orchestra, chamber music and chorus, all coached by the PMP faculty, including Perlman. Throughout the two weeks there will be several "Works in Progress" recitals.

A two-part gala has been scheduled during the residency. It includes a dinner on December 29, and a Perlman Music Program performance on December 30. The gala will be available as a package, with limited seating.

As host of the Perlman Music Program's Sarasota Residency, the Florida West Coast Symphony will make available the practice and performance spaces in the Beatrice Friedman Symphony Center located in downtown Sarasota. The students will be housed at the nearby Hyatt Sarasota.

"Sarasota has been described as an international arts center, and this partnership continues that tradition," stated Joseph McKenna, executive director of the Florida West Coast Symphony. "It is an extension of the Symphony's commitment to the highest standards in education and performance." In addition to orchestral performances, the Symphony has an extensive education program for children and adults, and sponsors the Sarasota Music Festival, a three-week performing and teaching festival for college-age students. The orchestra has twice hosted the National Youth Orchestra Festival for high-school age students, a program of the American Symphony Orchestra League. –Jane Cohen and Bob Grossweiner