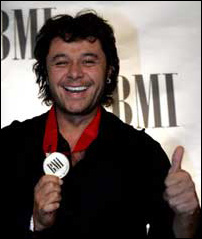 MIAMI (CelebrityAccess MediaWire) — The Miami Herald and Fox News are both reporting that latin pop star, Fabio "Estefano" Salgado, filed a lawsuit claiming his manager disappeared with $2.8 million of his earnings after the star was shot in the head and left for dead.

The lawsuit claims Jose Luis Gil, who has produced hits for Gloria Estefan, Marc Anthony and Shakira, has "extensive ties" to the alleged gunman, Francisco Oliveira, but does not directly accuse Gil of involvement in the murder attempt.

Oliveira, a handyman for Estefano's recording studio and home, was arrested the day after the shooting. He has pleaded not guilty to an attempted murder charge. The Brazilian-born man refused to talk to detectives.

Police believe he entered Estefano's waterfront Miami mansion and shot him twice as the producer begged for his life.

Oliveira's defense attorney, Frank Rubio, called the connection between his client and Gil far-fetched: "I don't know the connection other than he was an employee" at the studio.

Gil may be in Spain, said Neil Taylor, a criminal defense attorney hired by Estefano.

After he was shot in the head and left for dead in May, Latin pop star Fabio ''Estefano'' Salgado discovered his financial manager had disappeared with at least $2.8 million of his earnings, according to a lawsuit filed Tuesday.

Miami's homicide unit said detectives are still investigating, and a motive has not been determined.

Miami-Dade Circuit Judge Ronald Friedman late Tuesday ordered the assets of Gil's companies holding Estefano's money to be frozen. He also ordered all business records to be turned over to Estefano's attorneys.

The suit includes copies of checks drawn from Gil's business account and paid to Oliveira.

According to Estefano's lawsuit, the pop star met Gil 11 years ago at a music trade show. He hired him to manage his business affairs with the understanding that Gil would receive 10 percent of the producer's earnings, the suit said.

The relationship between Estefano and Gil developed into a close friendship. Estefano even came to regard Gil as a father figure, and Estefano ultimately entrusted Gil with all of his business and personal financial affairs.''

After the shooting, Gil disappeared. From his hospital bed, needing money for medical expenses, Estefano tried calling ''his closest friend'' dozens of times to no avail, the suit says.

According to the suit, Estefano then learned Gil had “somehow acquired complete control over nearly all of Estefano's funds and intellectual and other property.''

Estefano was ''shocked to learn'' Gil named himself the sole owner of American Business Trading Inc., started in Florida to manage Estefano's music.

The suit alleges Gil diverted millions to a company also called American Business Trading, this one incorporated in Panama.

Just before Estefano was shot, Sony Music paid him $3.3 million in advances to the Florida American Business Trading.

''Estefano has since been unable to locate or access'' the remaining money, according to the suit.

Estefano's near death and Oliveira's arrest have proven mysterious.

Newly released court records offer cryptic clues but still not a clear indication why Oliveira would have shot his boss.

In an initial interview with Detective Orlando Benitez, Estefano “only mentioned that [Oliveira] was having problems with his own wife and was possibly going through a divorce.”

One week before the shooting, the handyman gave the star and his girlfriend a ride to a cruise ship and appeared bothered by her presence, according to court documents.

Oliveira ''had a rude tone in his voice,'' according to the documents filed in Miami-Dade Circuit Court. The pop star felt the handyman acted ''very strange and disrespectful'' toward his girlfriend.

When Estefano returned from the trip, he found the remote control to his front gate missing — which detectives concluded that Oliveira may have used to leave the property after the shooting.

According to police, Estefano and Oliveira had agreed to meet at about 9 p.m. to discuss tinting his living room windows and gardening work. Estefano also planned to buy $300 worth of marijuana from the handyman, police said.

Oliveira arrived on his motorcycle. He wore a jacket, gloves and pants, all black, all leather. He smelled of motorcycle fuel, Estefano remembered.

In the kitchen, Estefano noticed the handyman looked nervous. He asked what was wrong.

Oliveira ''replied by saying yes because he was still having problems with his wife and the divorce they were going through,'' according to the summary of his statement.

The report said the handyman put his backpack on the counter, fished out a stainless steel gun, pointed it at him and said: “Do you know what this is?''

''I am going to kill you; you are messing with my family,'' Oliveira said before firing the second shot to the back of the head, Estefano later told detectives.