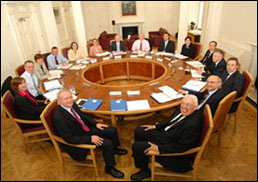 BELFAST, IRELAND (CelebrityAccess MediaWire) — A company which attracted star performers including Sir Elton John, Pavarotti, Eagles and Rod Stewart to Stormont Ireland is over £1.2m in debt, according to the BBC.

MLAs are to debate the Northern Ireland Events Company's future this week.

The company's board and the Culture Department are investigating how it got into so much debt and whether it can avoid being declared bankrupt.

Funding for the company has been cut in recent years, and the debt thought to be £1.2m amounts to half its annual budget.

Some sources suggest the government might bail out the company.

However, Sinn Fein's John O'Dowd, who chairs the Public Accounts Committee, argues that the company has demonstrated poor financial management and should be wound-up immediately.

More recently it has been involved in sporting events like the North West 200 motorcycle race.