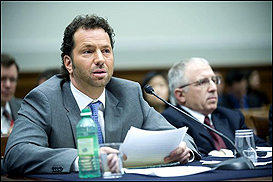 LOS ANGELES (CelebrityAccess MediaWire) — Live Nation's Michael Rapino and Ticketmaster Entertainment's Irving Azoff always manage to find something interesting to say when they are in a room together and a recent appearance hosting a Q&A session at 2009 Bank of America, Merrill Lynch Media, Communications and Entertainment Conference was no different.

Among the things the pair mentioned were several upcoming tours, including a 2010 tour by Van Halen. The last tour by the band saw them reunited with their former frontman David Lee Roth (Well, except for the MTV awards in 1996.)

"Axl and Gun n' Roses are confirming some Japan dates starting December 6th for those of you who would like to start the lottery to see if those get played." Azoff joked.

Michael Rapino also confirmed that Shakira plans to be on the road in 2010 and that he expects U2's current tour to set the new record for the most successful tour ever.

The session wasn't all about tours and attendees posed questions about the future of the 360 deal.

"We will not do more 360s – we adjusted our plan like everyone else with the economy and our number one goal right now is cash flow." Rapino told the assemblage.

Rapino also stated that Live Nation's numbers were off of last year by about 5%, but that last year had been a record-setter for attendance. Rapino also took pains to note that some key strategic moves had helped to bolster their bottom line.

Unsurprisingly, both Azoff and Rapino expressed confidence that the proposed merger deal would complete and that it was still undergoing evaluation by federal agencies such as the Department of Justice and demured with a bit of humor.

"We run a shuttle service to Washington D.C. if anyone wants to join us." Azoff quipped, leaving Rapino to note, "I've never realized until we sat in on this thing how much I play the straight man and how much he is Johnny Carson." – CelebrityAccess Staff Writers