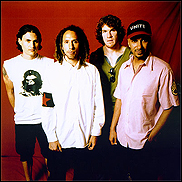 INDIO, CA (CelebrityAccess MediaWire) — A reunited Rage Against The Machine will join the Red Hot Chili Peppers and Bjork as headliners of this year's Coachella Valley Music & Arts Festival, set for April 27, 28 and 29 at the Empire Polo Field in Indio, California.

For the first time in its eight-year history, Coachella expands to three days, giving concert-goers an addition day to experience the eclectic mix of acts for which the festival has become known.

The preliminary line-up for the festival is as follows:

Additional artists will be announced in the near future.

Tickets for the festival go on sale Saturday, January 27th at 10:00 AM Pacific Time via Ticketmaster. General admission tickets are priced at $249.00 for a three-day pass, with single-day tickets selling for $85.00 each. –by CelebrityAccess Staff Writers