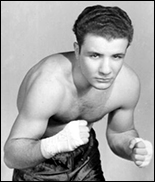 (CelebrityAccess) — Jake LaMotta, a boxer whose memoir served as the inspiration for director Martin Scorsese's classic film "Raging Bull" had died. He was 95.

The former world middleweight boxing champion died in a nursing home due to complications from pneumonia, his wife told TMZ.

Born in 1922 in the Bronx borough of New York City, LaMotta took up boxing after he was rejected by the military for medical reasons and his endurance and brawling fighting style quickly earned him the moniker "Raging Bull."

LaMotta was also known for his long-running rivalry with boxer Sugar Ray Robinson, besting him six times in the ring over the course of his career, including the dramatic 1951 bout known as the St. Valentine's Massacre which took place at Chicago Stadium.

LaMotta retired from fighting in the mid-1950s, and released a memoir in 1970 that served as the inspiration for filmmaker Martin Scorsese's 1980 film "Raging Bull" which is now regarded as a modern classic of American cinema. However, LaMotta was not one of the film's fans and believed it potryayed him in a poor light.

"Not a good movie, either, jerky, with gaps in it, a string of poorly lit sequences, some of them with no beginning and some with no end. No musical score," he told a reviewer after the film's release. "When I saw the film I was upset. I kind of look bad in it,"

"Then I realised it was true. That's the way it was… It's not the way I am now, but the way I was then," he added.