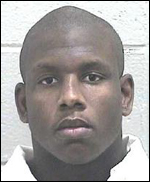 GRIFFIN, Georgia (CelebrityAccess MediaWire) — Griffin police have arrested four men in connection to the shooting death of aspiring rapper Yung Hott, who was killed in a brazen attack on Saturday while filming a music video.

According to the Atlanta Journal-Constitution, four suspects Bahir Howard, 22, Corderra Walker, 21, Terry James Fuller, 31, and Terrance Jones, 23 have been charged with murder, aggravated battery and child cruelty, among other charges related to the shooting, which left Yung Hott (AKA Jerode Paige) dead and four other people wounded. Among the other victims was a five-year-old girl who suffered non-critical injuries.

Police told the Atlanta Journal-Constitution that the four suspects allegedly approached the video shoot on foot, with three of the suspects allegedly firing handguns and a shotgun. Police have yet to explain a possible motive for the brazen attack, which was conducted in front of at least 150 people on hand for the filming but Paige was no stranger to legal entanglements and was on parole for firearms and drug offenses.

Paige was filming the video to support his first single, which had been in rotation on an Atlanta station.

"He got out [of prison] and he said he wasn't going to let anybody stop him from getting his career," his uncle Gary Paige told the AJC. "He wanted to give his grandmother a lot. He was really into his music and he wanted to show his grandmother he had the ability to be somebody." – CelebrityAccess Staff Writers