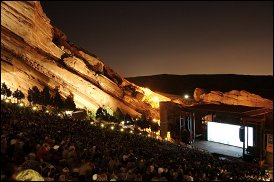 DENVER (CelebrityAccess) — Venue officials at Red Rocks were taken by surprise after a scathing open letter from a Denver Post reporter complained about unpleasant smells at the venue.

The letter, written by The Denver Post's Ricardo Baca, described an unpleasant stench on the east stairs and stage right bathrooms, describing the odor as "the worst port-a-potty experience you've ever witnessed."

""Sure enough, as we reached the bottom of the mammoth east stairs on Sunday – where the most eager fans often participate in the Red Rocks tradition of lining up for a day-long party of friend-making, drinking and revelry hours before each show’s gates open – we could smell the lingering stench of bodily fluids, stale alcohol and other substances best flushed down a toilet," Baca wrote in his open letter.

Baca also said that it wasn't a problem unique to the night that he visited Red Rocks and noted that friends had warned him about the odor from previous visits.

Kent Rice, executive director of Denver Arts and Venues, which manages Red Rocks, told the Denver Post that he was surprised to learn of the smell.

"Honestly, that's the first I've heard of it," Rice told the Post, while adding that he would investigate the matter.

Rice also said that the venue is thoroughly cleaned after every show, including pressure washing seating areas.

"Simply put, the venue is thoroughly clean," he added.