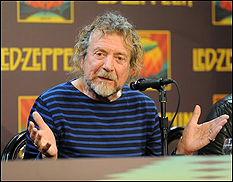 SYDNEY, Australia (CelebrityAccess MediaWire) — After Led Zeppelin played a hugely successful reunion gig in London in 2007, a follow-up tour almost seemed like fait accompli. But now, six years on, hope for such a spectacle has faded, helped along by repeated assurances from the members of the band that such a tour was unlikely.

As recently as October, 2012, while at a press conference for the release of a DVD of the reunion concert, Zep frontman Robert Plant appeared to grow testy when a reporter asked if the DVD heralded "larger things" for the band.

Plant responded to the question, saying: "We've been thinking about all sorts of things. And then we can't remember what we were thinking of." Then, after a pause, he added, "Schmuck."

Guitarist Jimmy Page also poked holes in hopes of a reunion tour at the press conference, noting that the 2007 concert was 5 years ago and in light of that, it "Seems pretty unlikely, doesn't it?" As well, in November, Page told Rolling Stone Magazine that both he and bassist John Paul Jones were willing to tour, but said that Plant had been disinterested.

Now, just a few months later, Robert Plant appears to be fanning the flames of reunion tour speculation once more. During an interview with the Australian version of television news program 60 Minutes, Plant denied that he was the main roadblock to a reunion tour.

"[Jimmy Page and John Paul Jones] are Capricorns. They don't say a word. They're quite contained in their own worlds and they leave it to me," said Plant. "I'm not the bad guy . . . You need to see the Capricorns – I've got nothing to do in 2014." – CelebrityAccess Staff Writers