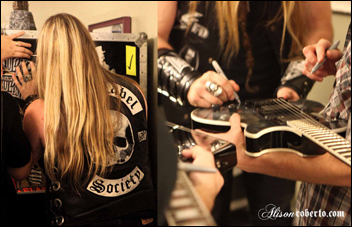 SAN FRANCISCO, CA (CelebrityAccess MediaWire) — America’s hard-rock and heavy-metal awards show, the Revolver Golden Gods presented by Epiphone, has donated two guitars, signed by the event’s winners, performers, and presenters, to raise money for the West Memphis Three defense fund. The WM3 are wrongfully-convicted Arkansas men—Jason Baldwin and Jessie Misskelley, who are currently serving life sentences in prison, and Damien Echols, who is on death row (find out more at wm3.org). They were arrested in June 1993 and convicted of murdering three elementary school children in 1994. In July 2007 the results of DNA testing, which was not available at the time of their trials, proved the three should never have been convicted of these heinous crimes.

The first guitar is a Zakk Wylde Graveyard Disciple, designed by the Black Label Society frontman and former Ozzy Osbourne guitarist, who was awarded the Best Guitarist Award at the 2010 Revolver Golden Gods. It features a coffin-shaped body, mother-of-pearl “cross” inlays on the headstock, block fingerboard position markers, contoured double pin-stripe edges, ebony finish, and black hardware. Signatures on the Graveyard Disciple include those of Jerry Cantrell of Alice in Chains, Kerry King of Slayer, Scott Ian of Anthrax, Zakk Wylde, and Chuck Billy and Eric Peterson of Testament.

The auction will last for 17 days—from May 24th to June 10th —one day for each year the West Memphis Three have spent behind bars. June 3, 2010, will mark the 17th anniversary of when Echols, Misskelley, and Baldwin were placed behind bars for a crime they did not commit.

All auction proceeds go to the WM3 defense fund via ATA, a tax exempt 501(c)(3) organization.


The starting bid for each instrument has been set at $999.


Revolver’s Golden Gods issue of the magazine hits newsstands on May 11. It features an exclusive interview with Damien Echols and excerpts from Marilyn Manson’s speech on his behalf at the award show. Highlights from the Revolver Golden Gods presented by Epiphone will air on VH1 Classic on May 22, 2010.