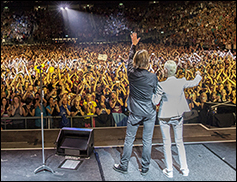 STOCKHOLM, Sweden (CelebrityAccess) — The management of Swedish group Roxette has confirmed that the band will not only cancel their upcoming live performances but as a result of doctor’s orders, Marie Fredriksson has been advised to stop touring.

The duo had been set to kick off the final leg of their RoXXXette 30th Anniversary Tour in Switzerland on June 3rd, with additional shows planned for countries such as Germany, the United Kingdom and Russia.

But on Monday the Swedish pop group issued a press release announcing that the summer shows had all been cancelled after Fredriksson`s doctor advised her to quit touring.

Their final performance was at the Grand Arena in Cape Town, South Africa on February 8 earlier this year.

Fredriksson, who reunited with her fellow Roxette member Per Gessle in 2010 after being diagnosed with brain cancer eight years earlier, said she was sad, but proud, to leave behind a long career and vast collection of global hits.

Originally formed in 1986, Roxette had their first major international hit with 1989's "The Look." Since then, the group has performed 557 live shows, sold more than 75 million albums, notching up four US Billboard number ones and numerous top hits on worldwide charts.

"It`s been an amazing 30 years! I feel nothing but joy and happiness when I look back on the Roxette world tours. All our shows and memories over the years will forever be a big part of my life," said the 57-year-old.

"Sadly, now my touring days are over and I want to take this opportunity to thank our wonderful fans that have allowed us on our long and winding journey." – Staff Writers