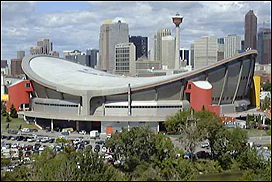 CALGARY (CelebrityAccess) — The National Hockey League team Calgary Flames announced that they were pulling out of negotiations with the City of Calgary over a new arena after failing to come to a mutually acceptable agreement.

According to the Canadian Broadcasting Company, the Flames said they were willing to contribute $275 million of their own money to help build the arena but now say they are no longer interested in pursuing the deal after two years of negotiation.

"We have decided not to pursue and really, that's the message today. We're fulfilling our promise that we said we'd tell people how much we were prepared to contribute," Calgary Sports and Entertainment Corp. president Ken King told CBC News on Thursday.

"We've done that, and now we're going to move on and have some fun with our hockey team and football team and other teams and get back to business," he added.

The Flames proposal put the cost of a new arena at $500 million for a new facility built near their current home of the Saddledome. The deal included a proposal to raise the remaining $225 million via a Community Revitalization Levy, derived via a property tax on business and development that grows around the proposed venue.

Some observers view the Flames pulling out of the arena talks as a negotiating strategy and connected to the Oct. 16 civic election in Calgary in which Mayor Naheed Nenshi is currently competing for his third term in office.

"It's clear they're at an impasse, or they're trying to create an impasse, to try to affect public opinion for the election," Sportswriter and analyst Bruce Dowbiggin told the CBC.