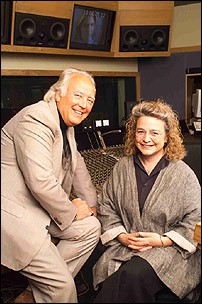 The Sanctuary Group, one of the world's leading developers of intellectual property rights (IPR) in the fields of music, television and entertainment, has agreed to acquire the Air-Edel Group, the leading international composer representation, music supervision and publishing company.

Air-Edel, established over 30 years ago by Sir George Martin and Herman Edel, both of whom have remained involved with the company to this day, manages a roster of composers, arrangers, music editors and music supervisors worldwide. Air-Edel is a growing specialist music publishing company, which administers both catalogue and individual works in the areas of film, TV, radio, theatre, ballet and commercials.

Strategically, this acquisition fits in with Sanctuary's existing artist and producer management activities, where it has over 40 managed artists and producers, as well as building up its music publishing activities. Sanctuary is also the world's largest independent owner of music catalogues, with over 100,000 tracks covering most genres.

Deke Arlon, President of Sanctuary Music Publishing and CEO Sanctuary Artist Management UK commenting on the acquisition, said, "Air-Edel has an excellent roster of talent and music publishing catalogues, and I am pleased to welcome the company to Sanctuary and thank Keith Evans for initiating the deal. Air-Edel artists will benefit from our world-class recording and writing facilities and be able to plug into our international network of promotion and exploitation. Sanctuary controls the world's largest independent catalogue of recorded music and is successfully exploiting this globally. We also expect to see early benefits from this exciting new acquisition with Maggie Rodford continuing as Managing Director of Air-Edel attracting an impressive roster of both established and younger artists."

In addition Air-Edel has provided music supervision/production and co-ordination services on many world famous films including 'Insomnia','Hannibal', 'Gladiator', Shakespeare in Love' and 'Muppets from Space'. The Air-Edel publishing catalogue includes many film, television and commercial titles and songs including the title track to Charlotte Church's album 'Dream A Dream'.

Maggie Rodford, MD of Air-Edel added,
"The acquisition of Air-Edel by Sanctuary represents a new and exciting chapter in the history and development of Air-Edel and we are looking forward to working closely together to further develop our leading role in the world of 'media music'. I believe that we will be able to provide some new and very creative opportunities for the uniquely talented group of composers whom we represent, particularly in the US, through our Los Angeles office, and where Sanctuary is building a very strong business."