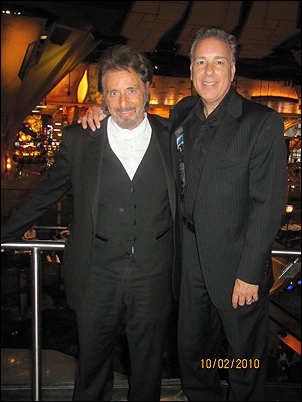 UNCASVILLE, CT (CelebrityAccess MediaWire) — Al Pacino, one of the most iconic actors in American film history, made his casino debut at the Mohegan Sun on October 2nd at an event called "Pacino..One Night Only."

The invitation-only event was a coup for Mohegan Sun. A warmly-received Pacino presented his body of work to a packed house of 1,000 people who were treated to film clips, behind the scenes stories of The Godfather, Scarface, character readings from his Broadway appearances, and he even read a scene from Shakespeare. The 90 minute show was hosted by Richard Brown, NYU's famed movie professor, who did an in-depth interview in the style of The Actors Studio. Pacino wrapped up the show with a Q&A, and then did a special 'meet & greet' with casino VIPs.

"This was a first for both Al Pacino and Mohegan Sun," said Tom Cantone, Vice President of Sports and Entertainment. "This will go down as one of the more special evenings. To actually deliver an icon like Pacino just for our guests was, without question, unique. It just doesn't happen every day."

As one guest put it, "This was the coolest evening I've ever been to at Mohegan Sun."

Cantone, who has made a career out of good timing and non-traditional casino debuts, put the deal together with Bob Walker, CEO of American Program Bureau.

Walker spoke about the deal, "Tom had the foresight to actually pick the right one of our clients, and it takes a little more imagination and marketing sense to know instinctively who people will respond to. As Tom said to me – 'we hit a homerun.'"- CelebrityAccess Staff Writers