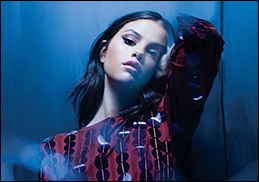 NEW YORK, (CelebrityAccess) — Music publication Billboard announced that they will name Selena Gomez as its 2017 Woman of the Year.

The award-winning singer, producer, and actress will receive the honor at the Women in Music dinner and awards ceremony at Ray Dolby Ballroom in Los Angeles on November 30th.

Gomez has scored numerous top 40 hits this year, including "Bad Liar," "Fetish" (featuring Gucci Mane), and "It Ain't Me" which generated more than half a billion streams since its release.

As well, Gomez served as executive producer for the well-reviewed Netflix drama 13 Reasons Why; and launched partnerships with Coach and Puma.

Gomez is also being recognized for her charitable and philanthropic efforts, including teaming up with the Step Up Foundation, serving as a coach for World Kindness Day, and hosting the WE Day charity telecast. She also participated in benefits such as Somos Live and the Hand in Hand Benefit for Hurricane Relief telethon.

In addition, Gomez helped raise over $500,000 for the Lupus Research Alliance, and illness she struggled with over the past year.

Previous artists named Woman of the Year include Lady Gaga, Taylor Swift, Pink, Katy Perry, Fergie, and Beyoncé. Additional honorees of Billboard's 2017 Women in Music event will be announced in the coming weeks.

This year's Women in Music event will be broadcast live via Twitter for the first time this year, starting at 9PM EST on Nov. 30th.