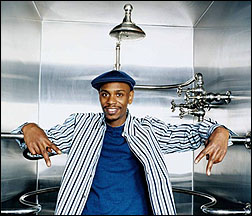 (CelebrityAccess News Service) – Showtime
makes its return to stand-up comedy with comedian Dave Chappelle, who will star in an upcoming one hour comedy special to be taped from a live event during the spring of 2004 at a venue to be determined. It is slated to air in early summer.

"Showtime is proud to return to its stand-up roots," Robert Greenblatt, president of Entertainment for Showtime Networks Inc. said. "There are some very edgy and talented comedians out there, and we want to showcase them. Now more than ever, the American public has a huge appetite for great humor. Dave Chappelle is a polished comedian whose irreverent commentary goes way beyond his young years. I'm thrilled that someone with his talent is on board with SHOWTIME as we come back to stand-up in a very big way. Comedy connoisseurs out there are in for a very big treat."

Chappelle, one of comedy's preeminent stars, earlier this year completed his Dave Chappelle Is BlackZilla Comedy, which hit 60 markets with 95 sold-out shows over a 12-week run. Chappelle is represented by UTA, Rick Greenstein and attorney Matt Johnson.–Bob Grossweiner and Jane Cohen