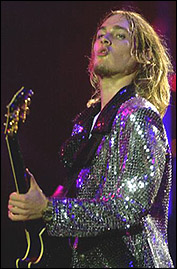 Australian rock group Silverchair has cancelled all their upcoming concert plans due to further deterioration in the health of the band's lead singer and guitarist, Daniel Johns, who is suffering from a severe case of reactive arthritis. The condition's primary symptoms are chronic swelling of the joints resulting in impaired movement and extreme pain.

"I'm truly sorry that I am not able to do the touring we had planned for so long," said Johns. "I apologize for the inconvenience these cancellations will cause. I am doing everything humanly possible to try and get well, but lately things have just kept getting worse."

"These cancellations are a major disappointment to the band," said the group's manager, John Watson. "The guys were really looking forward to finally getting out there and playing shows. However, the rapid decline in Daniel's health over the last two weeks in particular has simply made this physically impossible for him."

Johns contracted reactive arthritis late last year. In the majority of cases, the condition only lasts for approximately three months. However, new medical tests have revealed underlying complications, which appear to be preventing Johns from fighting off the virus which triggers this form of arthritis. His doctors remain certain that the condition is not life threatening and that he will eventually make a complete recovery.