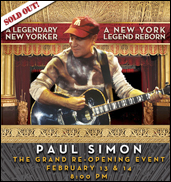 NEW YORK (CelebrityAccess MediaWire) — Paul Simon was on hand to dazzle a star studded crowd with a gig to celebrate the 16 million dollar renovation of the Beacon Theatre. Then 90 minutes into the performance, Simon said "Ladies and gentlemen, my old friend Art Garfunkel" and he was joined on-stage by his former musical partner.

A celebration referred to by Simon as "a gift to New York City. " "The fact that you still care is tremendous," Garfunkel said Friday, during the standing ovation that followed "The Sounds of Silence," according to Newsday.

Opening night of the Theatre with Simon as he Headlined and Garfunkel the surprised brought out an audience of celebrity including Jon Bon Jovi, Mayor Michael Bloomberg, Whoopi Goldberg, the Jonas Brothers, and even Sir Paul McCartney.

The Beacon is now under the Madison Square Garden/Radio City ownership. –by CelebrityAccess Staff Writers