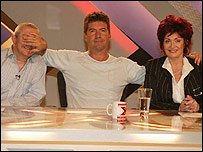 (CelebrityAccess MediaWire) — Simon Fuller, the creator of American Idol, is suing one of the show's hosts, Simon Cowell, over a new talent show in England that Fuller says is a rip-off of the original, the Hollywood Reporter said.

Fuller accuses the producers of The X Factor, who include Cowell, of infringing on the copyright of Idol.

The only thing the two talent shows have in common is Cowell, Cowell said about the suit.

The celebrity judge is in Las Vegas this week filming a new season of American Idol, for which Cowell has a three-year contract.

Both Fuller and Cowell said the legal action should not affect American Idol.

The action is being taken to protect our ('American Idol') format. It's not personal, said an unidentified spokesman for Fuller's 19 Entertainment company.

Freemantle Media, which produces The X Factor, issued a statement on behalf of itself and Cowell denying the charge. –by CelebrityAccess Staff Writers