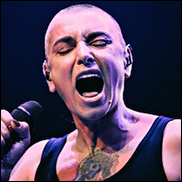 (CelebrityAccess) — Irish singer Sinead O'Connor released a tearful video via her social media on August 3rd discussing her mental illness that has raised some concern about her well-being.

In the video, O'Connor can be seen crying in a hotel room and stating that her family has abandoned her due to her mental health issues. She also expressed some suicidal thoughts and suggested that she felt punished for her mental illness.

"Suddenly, all the people who are supposed to be loving you or taking care of you treat you like s***," O'Connor said in the video. "If it was me, I'd be gone straight away back to my mom."

"People who suffer from mental illness are the most vulnerable people on Earth," she added. "You've got to take care of us. We're not like everybody."

O'Connor added that she hoped the video would be "somehow helpful" for people in a similar situation.

In a subsequent video, O'Connor said the motel was a Travelodge located in South Hackensack, New Jersey, but according to New Jersey Herald, the motel reported that they have no record of O'Connor staying there.

Singer Annie Lenox expressed concern for O'Connor in a post on her own social media on Tuesday.

"I realise that Sinead has some serious mental health issues, but she appears to be completely out on a limb and I'm concerned for her safety," Lenox wrote. "Are there no close friends or family who could be with her to give her some loving support? It's terrible to see her in such a vulnerable state."

This isn't the first incident to make people concerned for O'Connor. The singer disclosed in 2007 that she'd been diagnosed as bipolar and had attempted suicide in 1999. In 2016, she was reported as missing in Chicago after disappearing while on a bike ride but Chicago police reported finding her safe the following day.