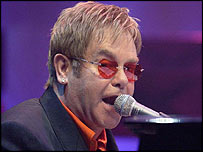 LONDON – According to the BBC Elton John is suing the Daily Mail and Sunday Times for libel, his publicist has confirmed.

The legal action is in connection with allegations about the star's behaviour at a social event held for the Elton John Aids Foundation.

The Sunday Times is being sued for repeating the claims first published in the Daily Mail.

A spokesman for the musician said that those allegations are a "ludicrous story" and "entirely false".

The singer's spokesman also said that legal action would be taken if details of the allegation were published anywhere else.

The Sunday Times has said it is dealing with the complaint and is expected to publish a correction in the next edition of the newspaper.

The 58-year-old chart topper's spokesman also said the Daily Mail had contacted him about the claims and had been told they were "categorically untrue".

The songwriter feels that the story has affected the reputation and image of charity, added the spokesman.

The story originally published in the Daily Mail on 24 June, concerned the annual White Tie and Tiara Ball hosted by Sir Elton, which took place in Windsor and was attended by a number of celebrities.

Sir Elton, who is due to take part in the Live 8 concerts on Saturday, was paid an estimated £1m in libel damages by The Sun newspaper in 1987.

The singer made an out-of-court settlement for allegations printed in the newspaper, which printed a front page apology.