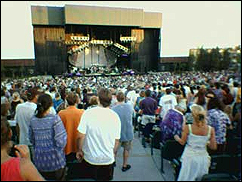 MARYSVILLE, CA (CelebrityAccess MediaWire) — Live Nation has confirmed that they've put the Sleep Train Amphitheatre on the market with a county spokesman revealing the ask price for the shed is set at $2.7 million. Live Nation had indicated that they were considering divesting the venue earlier this year.

According to a local newspaper, The Appeal Democrat, Live Nation has requested that the county re-appraise the property value for the Sleep Train at $7 million.

"The reality is the dirt out there is worth more" than the amphitheater itself, County spokesman Russ Brown told the Appeal-Democrat.

Originally opened in 2000, the 18,500-seat shed was envisioned as a premier concert destination in the region, but has since faced challenges, not only from traffic issues and noise complaints, but also the venue's proximity to potential customers.

"You tend to see better sales at Arco Arena," Greg Cullen of Preferred Seating told the Appeal-Democrat. "But even some Arco shows have not had very good success compared to other venues. I think Live Nation has just decided Sacramento isn't a great market for concerts." – CelebrityAccess Staff Writers