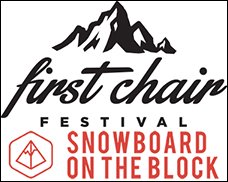 DENVER (CelebrityAccess) — The Enthusiast Network this week announced plans for the return of their Snowboard On The Block festival, as well as the debut of a new music and snow sports event set for Denver later this year.

Taking place on October 14th at Denver's Sculpture Park, the 5th annual Snowboard on the Block will feature music (with a lineup TBA), appearances by popular snowboarding athletes, a film festival, featuring a roundup of the year's best snowboarding-related films, and a vendor area with snowboarding retailers.

As well, the event will include a Pro Rail Jam, featuring some of the top snowboarders in the world competing on a closeout-style setup in the middle of Sculpture Park at the Denver Performing Arts Complex.

If you're the sort that prefers to ski over snowboarding, the First Chair Festival will take place for the first time in Denver this year on Oct. 7th. Like its snowboarding twin, the festival will feature a two-story pro rail jam, ski film premieres, a 'popup' retail area, and pro athelete appearances.

Music will be on offer at First Chair as well and while the lineup has yet to be announced, the fest will be headlined by Boston-based indie-poppers Air Traffic Controller.