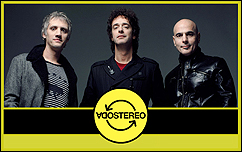 BUENOS AIRES, Argentina (CelebrityAccess MediaWire) — Argentinean power trio Soda Stereo sold out 90,000 tickets for the first two shows of their reunion tour in under 24 hours, as well as an additional 45,000 for a third add-on show within another 48 hours, cementing the band’s legacy as one of the world’s most popular Latin rock groups of all time.

Soda Stereo, which formed in 1982, is returning to the road after a 10-year break, and starting with a string of shows at the River Plate Stadium in Buenos Aires beginning October 19, and playing multiple dates at the Foro Sol in Mexico and Estadio Nacional in Chile. Over 300,000 fans are expected to attend the band’s first five shows of the tour.

The members of the band, Gustavo Cerati, Zeta Bosio and Charly Alberti, have all focused on their solo recording careers and the music business since their farewell tour ended in Buenos Aires in 1997.

Rumors of a reunion for the band have been gaining momentum throughout the last few months, and were officially confirmed in June. –by CelebrityAccess Staff Writers