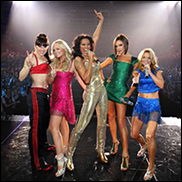 NEW YORK (CelebrityAccess) — The singer and "America's Got Talent" judge, Mel B would be game for a Spice Girls' reunion in 2016. Fans were delighted when she eluded to the fact this reunion may just be in the works on Howard Stern's Show.


Scary Spice also mentioned the months of reunion rumors. She spoke about the group's twentieth anniversary tour in 2016 during a pre-taped interview for "Alan Carr's New Year’s Eve Specstacular."


"To be serious, it is our twentieth anniversary this year, and it would be rude not to celebrate, so hopefully something will be happening pretty soon," Scary Spice said in the interview.


According to NBC, Mel B did not reveal any more details on the reunion. The sexy UK girl group has not performed since their last reunion tour in 2007-08 and also made an appearance in the 2012 Summer Olympics closing ceremony in London, singing a medley of their songs.


Will the proposed reunion contain all 5 Spice Girls? Time will tell as there is no word yet on whether four or five ladies might take the stage in 2016. However, Victoria Beckham, a.k.a. Posh Spice, will most likely not be a part of it, according to a report by The Sun. In 2014, when asked about a potential reunion, Beckham said "I won't ever do it again.'' That seems pretty clear.