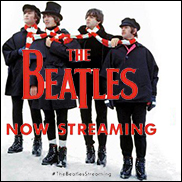 (Hypebot) – In hopes of reaching a younger audience, The Beatles are finally make their streaming debut. This signals the industry's gradual movement away from its reliance on back-cataloged sales, but is bad news for up-and-coming artists as these sales have historically helped to fund their break-outs.

So the Beatles are finally coming to streaming…well much of the Beatles’ catalogue is at least. Is it a big deal? Kind of. The Beatles were late to iTunes and they’re now late to streaming. Fashionably late though. No so soon as to be left standing awkwardly waiting for something to happen and not too late to miss the real action.


The Beatles are unique enough, and important enough to dictate their own terms and set their own timetable. For streaming services the Beatles catalogue is strategically important in the way it was for iTunes in that it helps communicate the value proposition of all the music in the world…well most of it. For the Beatles it represents the opportunity to reach younger audiences that sales are currently missing (which in large part explains why the catalogue is being made available on free tiers too).


It’s All About Targeting


20 years ago everyone pretty much bought the same product, the CD. Now though the music consumer landscape is fragmented and siloed. The fact that Adele’s ‘Hello’ simultaneously delivered stellar performance across audio streaming, video streaming, download sales and radio illustrates that there are many highly distinct groups of consumers that do one but not the other. This what Universal will be banking on with bringing the Beatles to streaming: they’ll be hoping that most of the future prospective buyers of Beatles albums are not streaming. For as long as this elongated transition phase continues, this sort of approach can work.


What Happens When The Bottom Falls Out Of the Catalogue Business?


The business model of record labels has long depended on revenue from back catalogue propping up the loss-leading new artists, on whom labels have to spend heavily to break. That model works as long as back catalogue sales are vibrant. But cracks are now showing in that model. Labels, especially the big ones, are increasingly spending even more heavily on a smaller number of big bets. For major labels many of these are either manufactured or laser targeted pop acts that grow big fast but like genetically modified crops, soak the nutrients out of their fan-base soil and are less likely to have long term careers. This means breaking artists are costing more to break and have less long term revenue potential.

That double whammy in itself would be bad enough, but there is an even more important structural factor at play. Catalogue sales depend on people buying classic albums, reissues and retrospectives. The secret is in the term ‘sales’. The model does not translate the same way to sales. Getting someone to spend $10 on an album for old times’ sake that they might listen to a handful of times but value having in their collection is very different from earning $0.20 or so from the same number of listens. But that is the way the world is heading. Older music buyers (i.e. from late 30’s onwards) are the lifeblood of catalogue sales.


That model works for older consumers that grew up buying music and thus have the habit. But what happens when the first millennials enter their late 30s? Which is exactly what is going to start happening from 2016 onwards. As each new cohort of aging millennials passes 35 a smaller percentage of them will have ever regularly bought music. Thus from 2016 onwards every year will mean an ever smaller number of catalogue buyers coming into the top of the funnel.


The long term implications are clear. While this will not be anything like an instant collapse, the impact will be progressively more painful as each year passes. The old label model of developing a vast bank of copyrights will become less and less relevant.


So Beatles, welcome to streaming, this will be your last new format hurrah.