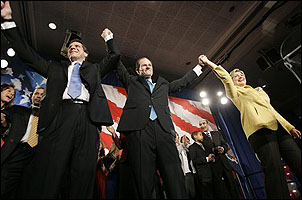 NEW YORK (CelebrityAccess MediaWire) — With Eliot Spitzer's landslide victory in his campaign for Governor of the great state of New York, record companies must be breathing a sigh of relief. If they are, it may be presumptuous.

Spitzer, formerly the Attorney General of New York, had risen to prominence, in part due to his well-publicized investigations into some allegedly illegal pay-for-play activities. He subpoenaed for record conglomerates, Universal Music Group, Sony BMG Music Entertainment, EMI Group and Warner Music Group. Sony, EMI, UMG and CBS all settled the investigations with multi-million dollar settlements, for as much as $12 million dollars in the case of Universal Music Group. In February of 2006, Spitzer widened his probe to look into the radio conglomerate side of this apparent music combine. He also tangled with the Feds, accusing the FCC of undermining his investigation by negotiating independently with the music companies under investigation.

It is unclear how Spitzer's election to governor will affect any ongoing investigations.

The music industry isn't out of the woods yet. There is still the matter of the federal probes. Thus Far, the FCC's interest in the case has been anemic at best, apparently responding primarily to public pressure brought by the Spitzer investigations. That may change however, Sen. Russ Feingold (D-Wis) has sent a letter to Kevin Martin, chairman of the FCC, urging federal regulators to continue their investigations. "I hope this request will prompt the FCC to make a clear statement that it will not tolerate payola in any form, in order to close any supposed loopholes," Feingold wrote. "I urge the FCC to build on Attorney General Spitzer’s investigation and assert its authority to prevent payola to the fullest extent possible." If this pressure will continue now that the midterm elections are over however, remains to be seen. – CelebrityAccess Staff Writers