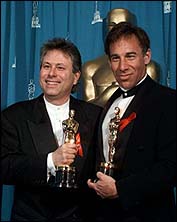 (CelebrityAccess Media Wire) — Stephen Schwartz, an Oscar and Grammy award-winning composer and lyricist, has been elected a Director by the Board of Directors of the American Society of Composers, Authors and Publishers (ASCAP). Schwartz will complete the term of musical theatre great Cy Coleman, who passed away last month. Coleman, who was Writer Vice Chairman of the ASCAP Board at the time of his death, had served 38 consecutive years as an ASCAP Board member.

"Stephen Schwartz has been a prominent contributor to the American Musical Theatre and music for film," said Marilyn Berman, ASCAP president and chairman. "He has given a great deal, as well, as a member of The ASCAP Foundation Board and as the energetic long-time artistic director of the ASCAP Foundation Musical Theatre Workshops in Los Angeles, New York and Chicago. We welcome the addition of his dynamism and vision to the ASCAP Board."

Schwartz wrote the music and lyrics for the current smash Broadway hit musical Wicked, which just marked its first anniversary. He provided music and lyrics to Godspell, for which he won several awards including two Grammies (Best Writer and Best Producer), Pippin, The Magic Show, The Baker's Wife, Studs Terkel's Working (which he also adapted and directed), and Children Of Eden. He collaborated with Leonard Bernstein on the English texts for Mass, which was commissioned to open The Kennedy Center, and wrote lyrics to Charles Strouse's music for Rags.

Schwartz also collaborated with Alan Menken on the scores for the Disney animated features Pocahontas, for which he won two Academy Awards (Best Song and Best Score from a Musical or Comedy) and The Hunchback of Notre Dame. He also wrote words and music for the DreamWorks animated feature The Prince of Egypt, for which he won another Academy Award for the song "When You Believe." He also provided music and lyrics for the original television musical, Geppetto, seen on The Wonderful World of Disney. –Bob Grossweiner and Jane Cohen