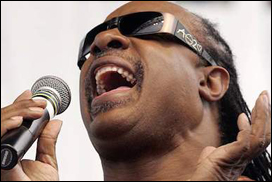 
Wonder`s appearance fulfils a long-held wish of the festival`s late founder Claude Nobs, who died in 2013.


"We tried to get Stevie many times," said festival director Mathieu Jaton.


The veteran star will play at the Swiss resort`s Stravinsky Auditorium on 16 July, with seats priced at 450 Swiss francs.


Williams, who stole the show at this year`s Oscars with his performance of Despicable Me 2`s Happy, will perform at the festival on 7 July.


"He is the artist we had to get this year," Jaton told Reuters.


"You hear Pharrell Williams everywhere on the radio and television. He has produced incredible pieces," he added, alluding to Williams` string of hit performances on tracks like Daft Punk`s Get Lucky and Robin Thicke`s Blurred Lines.


Thicke will also perform at the event, as will Chris Rea – who returns to the Montreux stage for the first time in 14 years.


Announcing the line-up, Jaton spoke about the on-going work to digitise the 6,000 hours of recorded music from Montreux concerts across the years.


"The digitising is nearly done," he said. "The archives were recognised by UNESCO last year as part of the world`s cultural heritage."


"We have the same spirit and way of doing things, but of course we miss Claude."


The Swiss festival was founded in 1967 and has hosted stars including Miles Davis, Ray Charles, David Bowie and Prince.