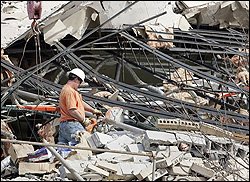 ATLANTA (CelebrityAccess MediaWire) â€“ According to 11Alive.com it could be May before one of Atlanta's landmark concert venues is hosting events again.

The Tabernacle underwent momentous damage during the tornado on May 14th. The storm blew out stained glass windows in the 98-year-old church turned concert hall. The Atlanta storm also did roof damage.

Officials with The Tabernacle say the building is structurally sound, but they want to do some upgrades before re-opening the venue.

Live Nation operates The Tabernacle. According to the Live Nation Web site, some shows will be moved, while others are postponed or canceled.

The Paramore concert has been moved to the Masquerade Music Park on Friday May 16th. The Levon Helm Band will now play at the Variety Playhouse. The Lifehouse concert has been postponed. A new date has not been set.

The Mars Volta concert scheduled for April 5th, has been canceled. Refunds are available at the point of purchase.

The Elvis Costello & The Imposters concert has been postponed, with a new date to be announced soon.

Tickets for rescheduled shows will be honored on the new date or at the new venue. – CelebrityAccess Staff Writers